The World of Ice 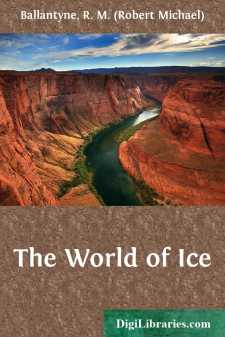 Nobody ever caught John Buzzby asleep by any chance whatever. No weasel was ever half so sensitive on that point as he was. Wherever he happened to be (and in the course of his adventurous life he had been to nearly all parts of the known world) he was the first awake in the morning and the last asleep at night; he always answered promptly to the first call, and was never known by any man living to have been seen with his eyes shut, except when he winked, and that operation he performed less frequently than other men.

John Buzzby was an old salt—a regular true-blue jack tar of the old school, who had been born and bred at sea; had visited foreign parts innumerable; had weathered more storms than he could count, and had witnessed more strange sights than he could remember. He was tough, and sturdy, and grizzled, and broad, and square, and massive—a first-rate specimen of a John Bull, and, according to himself, “always kept his weather-eye open.” This remark of his was apt to create confusion in the minds of his hearers, for John meant the expression to be understood figuratively, while, in point of fact, he almost always kept one of his literal eyes open and the other partially closed, but as he reversed the order of arrangement frequently, he might have been said to keep his lee-eye as much open as the weather one. This peculiarity gave to his countenance an expression of earnest thoughtfulness mingled with humour. Buzzby was fond of being thought old, and he looked much older than he really was. Men guessed his age at fifty-five, but they were ten years out in their reckoning, for John had numbered only forty-five summers, and was as tough and muscular as ever he had been—although not quite so elastic.

John Buzzby stood on the pier of the seaport town of Grayton watching the active operations of the crew of a whaling ship which was on the point of starting for the icebound seas of the frozen regions, and making sundry remarks to a stout, fair-haired boy of fifteen, who stood by his side gazing at the ship with an expression of deep sadness.

“She’s a trim-built craft and a good sea-boat, I’ll be bound, Master Fred,” observed the sailor, “but she’s too small by half, accordin’ to my notions, and I have seen a few whalers in my day. Them bow-timbers, too, are scarce thick enough for goin’ bump agin the ice o’ Davis Straits. Howsome’iver, I’ve seen worse craft drivin’ a good trade in the Polar Seas.”

“She’s a first-rate craft in all respects, and you have too high an opinion of your own judgment,” replied the youth indignantly. “Do you suppose that my father, who is an older man than yourself, and as good a sailor, would buy a ship, and fit her out, and go off to the whale-fishery in her if he did not think her a good one?”

“Ah! Master Fred, you’re a chip of the old block—neck or nothing—carry on all sail till you tear the masts out of her! Reef the t’gallant sails of your temper, boy, and don’t run foul of an old man who has been all but a wet-nurse to ye—taught ye to walk, and swim, and pull an oar, and build ships, and has hauled ye out o’ the sea when ye fell in—from the time ye could barely stump along on two legs, lookin’ like as if ye was more nor half seas over.”

“Well, Buzzby,” replied the boy, laughing, “if you’ve been all that to me, I think you have been a wet-nurse too!...