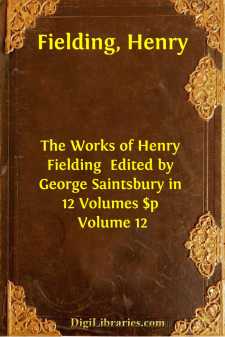 Too long the Tragick Muse hath aw'd the stage,And frighten'd wives and children with her rage,Too long Drawcansir roars, Parthenope weeps,While ev'ry lady cries, and critick sleepsWith ghosts, rapes, murders, tender hearts they wound,Or else, like thunder, terrify with soundWhen the skill'd actress to her weeping eyes,With artful sigh, the handkerchief applies,How griev'd each sympathizing nymph appears!And box and gallery both melt in tearsOr when, in armour of Corinthian brass,Heroick actor stares you in the face,And cries aloud, with emphasis that's fit, onLiberty, freedom, liberty and Briton!While frowning, gaping for applause he stands,What generous Briton can refuse his hands?Like the tame animals design'd for show,You have your cues to clap, as they to bow,Taught to commend, your judgments have no share,By chance you guess aright, by chance you err.

But, handkerchiefs and Britain laid aside,To-night we mean to laugh, and not to chide.

In days of yore, when fools were held in fashion,Tho' now, alas! all banish'd from the nation,A merry jester had reform'd his lord,Who would have scorn'd the sterner Stoick's word

Bred in Democritus his laughing schools,Our author flies sad Heraclitus rules,No tears, no terror plead in his behalf,The aim of Farce is but to make you laughBeneath the tragick or the comick name,Farces and puppet shows ne'er miss of fameSince then, in borrow'd dress, they've pleas'd the town,Condemn them not, appearing in their own

Smiles we expect from the good-natur'd few,As ye are done by, ye malicious, do,And kindly laugh at him who laughs at you.

PERSONS IN THE FARCE. MEN.

Luckless, the Author and Master of the Show, … Mr MULLART. Witmore, his friend … Mr LACY.

Moneywood. Never tell me, Mr Luckless, of your play, and your play. I tell you I must be paid. I would no more depend on a benefit-night of an unacted play than I would on a benefit-ticket in an undrawn lottery. Could I have guessed that I had a poet in my house! Could I have looked for a poet under laced clothes!

Luck. Why not? since you may often find poverty under them: nay, they are commonly the signs of it. And, therefore, why may not a poet be seen in them as well as a courtier?

Money. Do you make a jest of my misfortune, sir?

Luck. Rather my misfortune. I am sure I have a better title to poverty than you; for, notwithstanding the handsome figure I make, unless you are so good to invite me, I am afraid I shall scarce prevail on my stomach to dine to-day....