The Works of Aristotle the Famous Philosopher Containing his Complete Masterpiece and Family Physician; his Experienced Midwife, his Book of Problems and his Remarks on Physiognomy 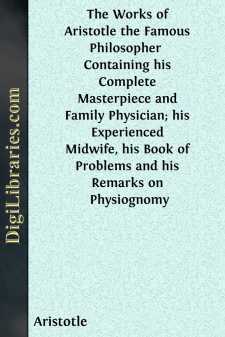 PART I—BOOK I THE MASTERPIECE

There are very few, except some professional debauchees, who will not readily agree that "Marriage is honourable to all," being ordained by Heaven in Paradise; and without which no man or woman can be in a capacity, honestly, to yield obedience to the first law of the creation, "Increase and Multiply." And since it is natural in young people to desire the embraces, proper to the marriage bed, it behoves parents to look after their children, and when they find them inclinable to marriage, not violently to restrain their inclinations (which, instead of allaying them, makes them but the more impetuous) but rather provide such suitable matches for them, as may make their lives comfortable; lest the crossing of those inclinations should precipitate them to commit those follies that may bring an indelible stain upon their families. The inclination of maids to marriage may be known by many symptoms; for when they arrive at puberty, which is about the fourteenth or fifteenth year of their age, then their natural purgations begin to flow; and the blood, which is no longer to augment their bodies, abounding, stirs up their minds to venery. External causes may also incline them to it; for their spirits being brisk and inflamed, when they arrive at that age, if they eat hard salt things and spices, the body becomes more and more heated, whereby the desire to veneral embraces is very great, and sometimes almost insuperable. And the use of this so much desired enjoyment being denied to virgins, many times is followed by dismal consequences; such as the green weesel colonet, short-breathing, trembling of the heart, etc. But when they are married and their veneral desires satisfied by the enjoyment of their husbands, these distempers vanish, and they become more gay and lively than before. Also, their eager staring at men, and affecting their company, shows that nature pushes them upon coition; and their parents neglecting to provide them with husbands, they break through modesty and satisfy themselves in unlawful embraces. It is the same with brisk widows, who cannot be satisfied without that benevolence to which they were accustomed when they had their husbands.

At the age of 14, the menses, in virgins, begin to flow; then they are capable of conceiving, and continue generally until 44, when they cease bearing, unless their bodies are strong and healthful, which sometimes enables them to bear at 65. But many times the menses proceed from some violence done to nature, or some morbific matter, which often proves fatal. And, hence, men who are desirous of issue ought to marry a woman within the age aforesaid, or blame themselves if they meet with disappointment; though, if an old man, if not worn out with diseases and incontinency, marry a brisk, lively maiden, there is hope of him having children to 70 or 80 years....