The Verbalist A Manual Devoted to Brief Discussions of the Right and the Wrong Use of Words and to Some Other Matters of Interest to Those Who Would Speak and Write with Propriety. 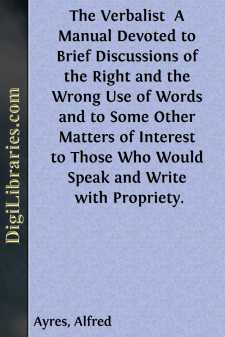 The title-page sufficiently sets forth the end this little book is intended to serve.

For convenience' sake I have arranged in alphabetical order the subjects treated of, and for economy's sake I have kept in mind that "he that uses many words for the explaining of any subject doth, like the cuttle-fish, hide himself in his own ink."

Suggestions and criticisms are solicited, with the view of profiting by them in future editions.

If "The Verbalist" receive as kindly a welcome as its companion volume, "The Orthoëpist," has received, I shall be content.

Eschew fine words as you would rouge.—Hare.

Cant is properly a double-distilled lie; the second power of a lie.—Carlyle.

If a gentleman be to study any language, it ought to be that of his own country.—Locke.

In language the unknown is generally taken for the magnificent.—Richard Grant White.

He who has a superlative for everything, wants a measure for the great or small.—Lavater.

Words and thoughts are so inseparably connected that an artist in words is necessarily an artist in thoughts.-Wilson Flagg.

It is an invariable maxim that words which add nothing to the sense or to the clearness must diminish the force of the expression.—Campbell.

Propriety of thought and propriety of diction are commonly found together. Obscurity of expression generally springs from confusion of ideas.—Macaulay.

He who writes badly thinks badly. Confusedness in words can proceed from nothing but confusedness in the thoughts which give rise to them.—Cobbett.

A—An. The second form of the indefinite article is used for the sake of euphony only. Herein everybody agrees, but what everybody does not agree in is, that it is euphonious to use an before a word beginning with an aspirated h, when the accented syllable of the word is the second. For myself, so long as I continue to aspirate the h's in such words as heroic, harangue, and historical, I shall continue to use a before them; and when I adopt the Cockney mode of pronouncing such words, then I shall use an before them. To my ear it is just as euphonious to say, "I will crop off from the top of his young twigs a tender one, and will plant it upon an high mountain and eminent," as it is to say an harangue, an heroic, or an historical. An is well enough before the doubtful British aspiration, but before the distinct American aspiration it is wholly out of place. The reply will perhaps be, "But these h's are silent; the change of accent from the first syllable to the second neutralizes their aspiration." However true this may be in England, it is not at all true in America; hence we Americans should use a and not an before such h's until we decide to ape the Cockney mode of pronouncing them....