The Underground Railroad A Record of Facts, Authentic Narratives, Letters, &c., Narrating the Hardships, Hair-Breadth Escapes and Death Struggles of the Slaves in Their Efforts for Freedom, As Related by Themselves and Others, or Witnessed by the Author. 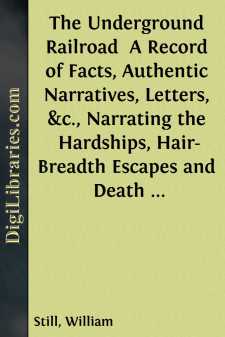 In the long list of names who have suffered and died in the cause of freedom, not one, perhaps, could be found whose efforts to redeem a poor family of slaves were more Christlike than Seth Concklin's, whose noble and daring spirit has been so long completely shrouded in mystery. Except John Brown, it is a question, whether his rival could be found with respect to boldness, disinterestedness and willingness to be sacrificed for the deliverance of the oppressed.

By chance one day he came across a copy of the Pennsylvania Freeman, containing the story of Peter Still, "the Kidnapped and the Ransomed,"—how he had been torn away from his mother, when a little boy six years old; how, for forty years and more, he had been compelled to serve under the yoke, totally destitute as to any knowledge of his parents' whereabouts; how the intense love of liberty and desire to get back to his mother had unceasingly absorbed his mind through all these years of bondage; how, amid the most appalling discouragements, prompted alone by his undying determination to be free and be reunited with those from whom he had been sold away, he contrived to buy himself; how, by extreme economy, from doing over-work, he saved up five hundred dollars, the amount of money required for his ransom, which, with his freedom, he, from necessity, placed unreservedly in the confidential keeping of a Jew, named Joseph Friedman, whom he had known for a long time and could venture to trust,—how he had further toiled to save up money to defray his expenses on an expedition in search of his mother and kindred; how, when this end was accomplished, with an earnest purpose he took his carpet-bag in his hand, and his heart throbbing for his old home and people, he turned his mind very privately towards Philadelphia, where he hoped, by having notices read in the colored churches to the effect that "forty-one or forty-two years before two little boys were kidnapped and carried South"—that the memory of some of the older members might recall the circumstances, and in this way he would be aided in his ardent efforts to become restored to them.

: Sons of Levin and Sidney—the last names of his parents he was too young to remember.

And, furthermore, Seth Concklin had read how, on arriving in Philadelphia, after traveling sixteen hundred miles, that almost the first man whom Peter Still sought advice from was his own unknown brother (whom he had never seen or heard of), who made the discovery that he was the long-lost boy, whose history and fate had been enveloped in sadness so long, and for whom his mother had shed so many tears and offered so many prayers, during the long years of their separation; and, finally, how this self-ransomed and restored captive, notwithstanding his great success, was destined to suffer the keenest pangs of sorrow for his wife and children, whom he had left in Alabama bondage.

Seth Concklin was naturally too singularly sympathetic and humane not to feel now for Peter, and especially for his wife and children left in bonds as bound with them....