The Two Hundredth Anniversary of the Settlement of the Town of New Milford, Conn. June 17th, 1907 Address Delivered by Daniel Davenport, of Bridgeport, Conn. 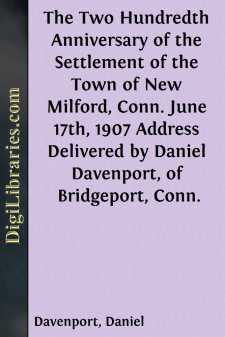 The settlement of New Milford began in 1707, exactly a century after that of Jamestown, Va. At that time, although Milford and Stratford at the mouth of the Housatonic had been settled almost seventy years, and the river afforded a convenient highway into the interior, for much of the distance, this place, only thirty miles from the north shore of Long Island Sound, was still beyond the extreme northwestern frontier of New England, and indeed of English North America.

The inhabitants of Connecticut then numbered about fifteen thousand, settled in thirty towns, mostly along the shore of Long Island Sound, and upon the banks of the Connecticut and Thames Rivers. During the thirty years next before, a few families from Norwalk had settled at Danbury, from Stratford at Woodbury, from Milford at Derby, and from Farmington at Waterbury. With these exceptions, hardly more than pin points upon the map, and a few settlements about Albany, N. Y., the whole of western and northwestern Connecticut and of western Massachusetts and northern New York was a savage wilderness, covered with dense forests, and affording almost perfect concealment for the operations of savage warfare.

Though the northwestern portion of Connecticut was then a most formidable and inhospitable wilderness, strenuous efforts were already being put forth by the Colony to encourage its settlement. For, strange as it seems to us now, at that time, owing to imperfect modes of cultivation and the difficulty of subduing the wilderness, the settled portions of the Commonwealth had begun to feel overpopulated. Twenty-five years before, the Secretary of the Colony had reported to the Home Government, that "in this mountainous, rocky and swampy province" most of the arable land was taken up, and the remainder was hardly worth tillage.

This need of more land, and the protection from invasion which the settlement of this section would afford the communities near the coast, and the innate love of adventure and desire to subdue the wilderness which have characterized the American people from the beginning, were the impelling causes which led to the planting of New Milford.

So pressing did this movement become that, though what is now Litchfield County was then as remote and inaccessible to the rest of the Colony, as were Indiana and Illinois to our fathers in the middle of the last century, within forty-five years after the first settler had built his log cabin and lighted his fire here, twelve towns had been settled and the county organized with a population of more than ten thousand.

In order that we may appreciate, somewhat, the broader political conditions under which the first settlers took up their abode here, which largely engrossed their thoughts and vitally affected them and their children for two generations, it is necessary, before taking up the narrative of their actual settlement here, to advert briefly to the state of affairs at that time in England, and on the continent of Europe, and in the English, French and Spanish Colonies of North America.

By 1707, it had become apparent to the people of Connecticut that, soon or late, they must fight for the very existence of their chartered privileges and natural rights, not alone the British Crown, but the English people. The disposition of the people of England to reap where they had not sown had become very clear. In April, 1701, Connecticut was named in the bill then introduced in Parliament to abrogate all American charters....