The Twenty-fifth Regiment Connecticut Volunteers in the War of the Rebellion History, Reminiscences, Description of Battle of Irish Bend, Carrying of Pay Roll, Roster 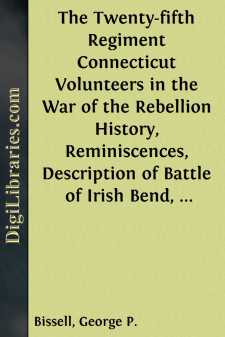 The Twenty-fifth Regiment, Connecticut Volunteers, (George P. Bissell, Colonel), was recruited in Hartford and Tolland Counties, in the fall of 1862. The regiment was composed of the very best material, being almost exclusively young men impelled by patriotic motives, and from the first they took a high stand for efficiency and good discipline.

Later in its history, when the regiment had been tried in marches and battles, it was thus described by Adjutant-General Morse in his report to the Legislature for 1864: "This is one of the best of our nine months' regiments and bore a conspicuous part in the advance upon, and the campaign preceding, the fall of Port Hudson. By the bravery always displayed on the field of battle, and the patience and endurance manifested on many long and arduous marches, it has won for itself a high and lasting reputation."

The Twenty-fifth was mustered into the United States service November 11, 1862, and on the 14th sailed from Hartford for Centerville, L.I., to join at that rendezvous the Banks Expedition. The muster-roll showed 811 men thoroughly drilled and well appointed, except that they were without rifles which were later served to them on the ship after their arrival on the Mississippi River. The regiment embarked November 29, 1862, in two divisions;—one division of five companies under command of Colonel Bissell on the Steamer Mary Boardman; and the remainder under command of Lieutenant-Colonel Stevens on the Steamer Empire City. The destination of the expedition was unknown when the vessels sailed as the sealed orders were not to be opened until we had sailed twenty-four hours to the southward and eastward. The orders, when opened, were found to be simply to report at Ship Island, off the mouth of the Mississippi River, allowing a stop at Dry Tortugas for coal if necessary. The ships duly arrived at Ship Island and proceeded at once up the river to New Orleans where they arrived on the 14th of December, 1862. On the 16th, the Mary Boardman, with several of the other ships proceeded to Baton Rouge, where they arrived the next day. The Empire City landed the left wing of the regiment at Camp Parapet, just above New Orleans. The forces landed at Baton Rouge after a brief bombardment of the city and the Twenty-fifth (five companies), went into camp first on the United States Arsenal ground in the city and later near the cemetery, back of the city, where after some delay the left wing joined the colonel's command and the regiment was once more united and in fighting trim. The regiment was first brigaded under General Albert E. Payne of Wisconsin, a noble and brave officer, afterwards with the Thirteenth Connecticut. The Twenty-sixth Maine and One-Hundred and Fifty-ninth New York, under Colonel H. W. Birge, of the Thirteenth Connecticut, as Brigade Commander, an officer of rare ability and bravery and a disciplinarian of the best stamp. Under his command the Twenty-fifth served during its entire term of service. He led them in many battles and marches and while he was strictness personified, he was so magnanimous, brave, reasonable and such a thorough soldier, that the men worshiped him and would follow him into the face of any fire....