The True Life of Betty Ireland With Her Birth, Education, and Adventures. Together with Some Account of Her Elder Sister Blanch of Britain. Containing Sundry Very Curious Particulars 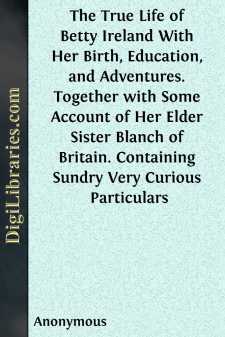 It is agreed on all Hands, that Betty Ireland was a younger Daughter by a second Venter; let, at first, to run wild in the Woods, cloathed with Skins and fed with Acorns; till a famous Hunter took her in his Toils, and, liking her Countenance, gave her to a Son of his, a Lad, to bring up. The Girl was born to a good Estate, but ill tenanted, and run to waste. Her Farms neither meared or bounded, her Rents never paid, as she had no certain Tenants, and had little more to claim than a Pepper-corn Acknowledgment. She had no Relation to manage her Demesnes, and could hardly be said to be possessed of any thing.

In this Condition the young Sportsman found her, was fond of her at first, and resolved to marry her; and happy had it been both for him and her, if he had kept his Resolution, and performed the Contract. But he hankered after his elder Brother’s Estate, and, on his Death, suddenly got the Tenants to attorn to him, and basely dispossessed his Nephew. But instead of an Estate, he got nothing but a Law-suit, lived in Broils, and dyed a Beggar. Whereas had he quitted all Pretensions at home, married Betty and minded her Concerns, he had soon been in a Condition not to envy his Brother; and, perhaps, had left a second Family little inferior in Greatness to the first.

This was the only Chance ever Betty had to make a separate Fortune, set up for herself, and be independent of her Sister. She was ever after beholden to her for maintaining her Rights, settling her Affairs, and bringing her Tenants to Reason.

Neither Betty or her Sister were yet of Age, but the Younger far from it, and continued under such Guardians, as the Elder recommended, and had chosen for herself. It was natural to think they should chiefly be employed in ordering the Affairs of Blanch, and be less attentive to benefit the other. Accordingly, from time to time, they sent Proxies, to let Leases, keep her Courts, and force Possession, where the Tenants held over. Little, however, was done for Betty, though they put her Sister to great Charges; nor did she thrive in the World to any Purpose, ’till she came under the Care of a good orderly Gentlewoman, who was also Guardian to Blanch, a notable Manager, and very affectionate to her Wards, understood their Business to a hair, and was never to be imposed on or over-reached. Every thing she put her hand to prospered, and every thing against her miscarried.

When she first looked into Betty’s Affairs, she found them in a manner desperate; her small Revenues had been embezzled by Agents, Farms set to insolvent Tenants, double Leases made out, huge Fines taken in Hand and sunk in their own Pockets. She was preyed upon by Vagabonds and Outlaws; and, to compleat her Misfortunes, a Foreign Count fell in love with her, an odious Monster and braggadocio Huffer. He swore bitterly no one else should have her, and to support his Claim, brought in his Pocket, a pretended Licence from the Spiritual Court, and a Pack of outlandish Goths along with him, to take Possession of her Freehold, and break down her Gates. But her Sister generously came in to her Assistance, repelled Force by Force, and rescued her from a Tyrant Ravisher, built Houses for herself, and Fences for the Tenants, and left some of her own People with her to instruct them in Trades and Husbandry.

She was then, it might be thought, in a Way of making herself respected, both by her own and her Sister’s Tenants, and not stand in need of any more Supplies from them; and if the good Woman, her guardian, had lived to bring Matters to any Kind of Establishment, Things had been better. But she unfortunately died, more, however, to her Sister’s Disadvantage than hers; for the Guardian had chalked out a Track of Proceeding for Betty, which she could hardly miss to follow....