The Trial of Theodore Parker For the "Misdemeanor" of a Speech in Faneuil Hall against Kidnapping, before the Circuit Court of the United States, at Boston, April 3, 1855, with the Defence 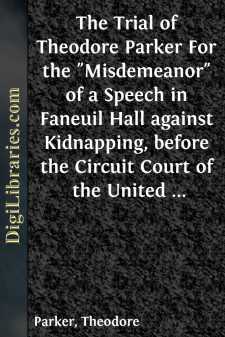 TO THE PEOPLE OF THE FREE STATES OF AMERICA.

If it were a merely personal matter for which I was arraigned before the United States Court, after the trial was over I should trouble the public no further with that matter; and hitherto indeed, though often attacked, nay, almost continually for the last fourteen years, I have never returned a word in defence. But now, as this case is one of such vast and far-reaching importance, involving the great Human Right to Freedom of Speech, and as the actual question before the court was never brought to trial, I cannot let the occasion pass by without making further use of it.

When Judge Curtis delivered his charge to the Grand-Jury, June 7th, 1854, I made ready for trial, and in three or four days my line of defence was marked out—the fortifications sketched, the place of the batteries determined; I began to collect arms, and was soon ready for his attack. When that Grand-Jury, summoned with no special reference to me, refused to find a bill and were discharged, I took public notice of the conduct of Judge Curtis, in a Sermon for the Fourth of July. But I knew the friends of the fugitive slave bill at Boston and Washington too well to think they would let the matter sleep; I knew what arts could be used to pack a jury and procure a bill. So I was not at all surprised when I heard of the efforts making by the Slave Power in Boston to obtain an indictment by another grand-jury summoned for that purpose. It need not be supposed that I was wholly ignorant of their doings from day to day. The arrest was no astonishment to me. I knew how much the reputation of this Court and of its Attorney depended on the success of this prosecution. I knew what private malignity was at work.

After my arraignment I made elaborate preparation for my defence. I procured able counsel, men needing no commendation, to manage the technical details which I knew nothing about and so could not meddle with, while I took charge of other matters lying more level to my own capacity. I thought it best to take an active part in my own defence,—for the matter at issue belonged to my previous studies and general business; my personal friends and the People in general, seemed to expect me to defend myself as well as I could.

A great political revolution took place between the Judge's charge and my arraignment, June 7th, and November 29th, 1854, and I thought the Court would not allow the case to come to open argument. For certainly, it would not be a very pleasant thing for Judge Sprague and Judge Curtis, who have taken such pains to establish slavery in Massachusetts, to sit there—each like a travestied Prometheus, chained up in a silk gown because they had brought to earth fire from the quarter opposite to Heaven—and listen to Mr. Hale, and Mr. Phillips and other anti-slavery lawyers, day after day: there were facts, sure to come to light, not honorable to the Court and not pleasant to look at in the presence of a New England community then getting indignant at the outrages of the Slave Power....