The Trial of Reuben Crandall, M.D. Charged with Publishing and Circulating Seditious and Incendiary Papers, &c. in the District of Columbia, with the Intent of Exciting Servile Insurrection. Carefully Reported, and Compiled from the Written Statements of the Court and the Counsel. 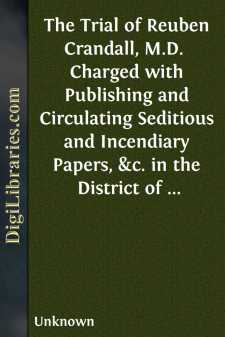 This was an indictment charging, in five counts and in various forms, the offence under the common law of libels, of publishing malicious and wicked libels, with the intent to excite sedition and insurrection among the slaves and free colored people of this District. The three first counts only having been relied upon, and no evidence having been offered under the others, an abstract, omitting the mere formal part, will be sufficient to show the nature of the libels charged.

1st. The first count charged the defendant with publishing a libel, containing in one part thereof these words: "Then we are not to meddle with the subject of slavery in any manner; neither by appeals to the patriotism, by exhortation to humanity, by application of truth to the conscience. No; even to propose, in Congress, that the seat of our republican Government may be purified from this crying abomination, under penalty of a dissolution of the Union."

And in another part thereof, in an article entitled "Reply to Mr. Gurley's letter, addressed to the Rev. R. R. Gurley, Secretary of the American Colonization Society, Washington city," signed by Arthur Tappan and others, the following words: "We will not insult your understanding, sir, with any labored attempt to prove to you that the descendants of African parents, born in this country, have as good a claim to a residence in it, as the descendants of English, German, Danish, Scotch, or Irish parents. You will not attempt to prove that every native colored person you meet in the streets, has not the same right to remain in this his native land, that you and we have. Assuming this as an incontrovertable truth, we hold it self-evident that they have as good right to deport us to Europe, under the pretext that there we shall be prosperous and happy, as we have to deport them to Africa on a similar plea."

And in another part thereof, in the said reply, the following words: "In what language could the unrighteous principles of denying freedom to colored people in this country, (which amounts to the same thing as demanding the expulsion of those already free,) be more effectually and yet more plausibly inculcated than in those very words of Gen. Harper you have, with so much approbation, quoted to us."

And in another part thereof, in the said reply, the following words: "Against this doctrine of suspending emancipation upon the contingency or condition of expatriation we feel bound to protest; because we believe that every man has a right to reside in his native country if he chooses, and that every man's native country is the country in which he was born—that no man's right to freedom is suspended upon, or taken away by his desire to remain in his native country—that to make a removal from one's own native country a sine qua non of setting him free when held in involuntary bondage, is the climax of moral absurdity."

And in another part thereof, in a certain other article, entitled "Three months' residence, or seven weeks on a sugar plantation, by Henry Whitby," containing the most shocking and disgusting details of cruel, inhuman, and immoral treatment of slaves by the owners and overseers, and attorneys or agents of proprietors, according to the tenor and effect following—that is to say: "On this and other occasions, I thought it my duty to acquaint the attorney with my observations and feelings in regard to the cruel floggings and severe treatment generally which I have witnessed at New Ground....