The Trial and Execution, for Petit Treason, of Mark and Phillis, Slaves of Capt. John Codman Who Murdered Their Master at Charlestown, Mass., in 1755; for Which the Man Was Hanged and Gibbeted, and the Woman Was Burned to Death. Including, Also, Some Account of Other Punishments by Burning in Massachusetts 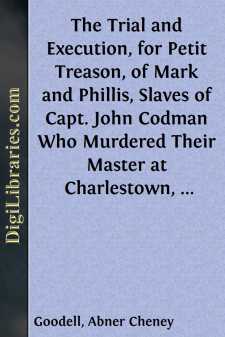 [The following pages are, with slight changes, a reprint from the Proceedings of the Massachusetts Historical Society, of a paper read before that Society, March 8, 1883, in answer to a question propounded at a previous meeting, relative to the authenticity of the tradition that a woman was burned to death in Massachusetts in the year 1755. As this case is the only known instance of the infliction of the common-law penalty for petit treason, in New England, and is not known to have been elsewhere reported, the printers have, at the author's request, struck off, in pamphlet form, a limited number of impressions for the use of persons interested in the history of our criminal jurisprudence, who may not have convenient access to the serial from which it is taken, or who may desire to preserve it separately.]

It is not surprising that the execution of a woman, by burning, so lately as when Shirley was governor,—a period when the province had greatly advanced in culture and refinement,—should seem to any one incredible. Indeed, even so critical and thorough a student of our provincial history as our late distinguished associate, Dr. Palfrey, once wrote to me inquiring if the rumor of such a proceeding had any foundation in fact, and if so, whether the execution took place according to law, or by the impulse of an infuriated mob. It gave me great satisfaction to be able to settle his doubts on this subject by referring him to the records of the Superior Court of Judicature, where the judgment, from which I shall presently read to you, and a copy of which I sent to him, appears at length.

The subject is important at this day only as serving to define the nature of the "cruel and unusual punishments" prohibited by the thirty-first article of the Declaration of Rights, in our state Constitution, since this mode of punishment, having continued after the adoption of the Constitution, cannot have been considered by the framers of that instrument either as "cruel" or "unusual" in the sense in which they used these words.

The particulars of the crime for which the malefactors, Mark and Phillis, were executed are briefly as follows: Captain John Codman, a thrifty saddler, sea-captain, and merchant, of Charlestown, was the owner of several slaves whom he employed either as mechanics, common laborers, or house servants. Three of the most trusted of these, Mark, Phillis, and Phebe,—particularly Mark,—found the rigid discipline of their master unendurable, and, after setting fire to his workshop some six years before, hoping by the destruction of this building to so embarrass him that he would be obliged to sell them, they, in the year 1755, conspired to gain their end by poisoning him to death.

In this confederacy some five or six negroes belonging to other owners were more or less directly implicated. Mark, the leader, was able to read, and signed his examination, hereafter referred to, in a bold, legible hand. He professed to have read the Bible through, in order to find if, in any way, his master could be killed without inducing guilt, and had come to the conclusion that according to Scripture no sin would be committed if the act could be accomplished without bloodshed. It seems, moreover, to have been commonly believed by the negroes that a Mr. Salmon had been poisoned to death by one of his slaves, without discovery of the crime. So, application was made by Mark, first to Kerr, the servant of Dr. John Gibbons, and then to Robin, the servant of Dr. Wm. Clarke, at the North End of Boston, for poison from their masters' apothecary stores, which was to be administered by the two women.

Essex, the servant of Thomas Powers, had also furnished Mark with a quantity of "black lead" for the same purpose. This was, unquestionably, not the harmless plumbago to which that name is now usually given, but galena, or plumbum nigrum, a native sulphuret of lead, probably used for a glaze by the potters of Charlestown....