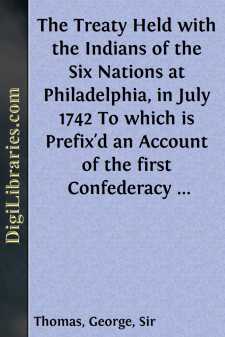 THE Deputies of the Six Nations having, at their last Visit, agreed to release their Claim to all the Land on both Sides of the River Susquehanna, as far South as this Province extends, and to the Northward to those called the Endless Mountains or Kittochtinny Hills; in Consideration whereof, they then received a large Quantity of valuable Indian Goods for the Lands situate on the Eastern Side of the said River, but declined at that Time to receive any for those on the Western Side of the said River, chusing to defer the same till another Visit: A large Number arrived from these Nations at Philadelphia, on Wednesday the 30th of June, with Deputies duly impowered to receive the said Goods; and acquainted the Governor, that being weary, from the Fatigue of their long Journey, they should crave three or four Days to rest themselves before they proceeded to their Business: In the mean Time they would wait on the Governor to discourse, according to their usual Method, about News and other Occurrences; which the Governor readily agreed to, and ask'd them when they would chuse to pay their first Visit; which they desiring might be on Friday the 2d of July in the Afternoon; the Council was accordingly summon'd, and met at Mr. Logan's House, where were

The Governor opened the Conference as follows.

'The Proprietor having purchased certain Lands from your Nations about Six Years ago, a Moiety of what was agreed to be given in Consideration of that Purchase was at that Time delivered to them, and the other being at their own Desire left in the Proprietor's Hands, He pressed you by Shikalamy, to send last Year for it, and would have been glad to have seen you and taken you by the Hand before his Departure. But as the Design of this Meeting is to hear your News, and converse together in a free and friendly Manner, I shall say no more about the Goods than that they lye ready at the Proprietor's House, and will be delivered when you shall have sufficiently rested from the Fatigue of your Journey.'

The Chief of the Onondagoes spoke,

'We propose to rest four Days, and then come to the main Business. At present we are at a private Conference about News, and have something of this Sort to mention to our Brother Onas.' And on the Governor's signifying they would be glad to know what it was, the Chief proceeded.

'It is our Way when we come to our Brethren, or any other Persons, whom we live in strict Friendship with, to remove all Obstructions to a good Understanding; with this View we are to inform you of a Piece of disagreeable News that happen'd in our Journey.—Some White People living at a Place called Conegocheegoe, whose Names we cannot tell, nor whether they belong to this or the neighbouring Government, but one of them, as we heard, had his House burnt over his Head some Years ago, and he was brought down a Prisoner and committed to the Goal of this City: These People lighting of our young Warriours, as they were hunting, made some Proposals about the purchasing of Land from them, and our young Men being indiscreet, and unacquainted with publick Business, were foolish enough to hearken to them, and to receive five Duffil Strowds for two Plantations on the River Cohongoronto....