The Substance of a Journal During a Residence at the Red River Colony, British North America and Frequent Excursions Among the North-West American Indians, In the Years 1820, 1821, 1822, 1823. 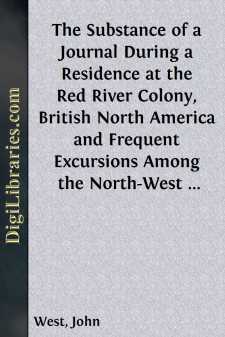 On the 27th of May, 1820, I embarked at Gravesend, on board the Honourable Hudson's Bay Company's ship, the Eddystone; accompanied by the ship, Prince of Wales, and the Luna brig, for Hudson's Bay. In my appointment as Chaplain to the Company, my instructions were, to reside at the Red River Settlement, and under the encouragement and aid of the Church Missionary Society, I was to seek the instruction, and endeavour to meliorate the condition of the native Indians.

The anchor was weighed early on the following morning, and sailing with a fine breeze, the sea soon opened to our view. The thought that I was now leaving all that was dear to me upon earth, to encounter the perils of the ocean, and the wilderness, sensibly affected me at times; but my feelings were relieved in the sanguine hope that I was borne on my way under the guidance of a kind protecting Providence, and that the circumstances of the country whither I was bound, would soon admit of my being surrounded with my family. With these sentiments, I saw point after point sink in the horizon, as we passed the shores of England and Scotland for the Orkneys.

We bore up for these Isles on the 10th of June, after experiencing faint and variable winds for several days: and a more dreary scene can scarcely be imagined than they present to the eye, in general. No tree or shrub is visible; and all is barren except a few spots of cultivated ground in the vales, which form a striking contrast with the barren heath-covered hills that surround them. These cultivated spots mark the residence of the hardy Orkneyman in a wretched looking habitation with scarcely any other light, (as I found upon landing on one of the islands) than from a smoke hole, or from an aperture in the wall, closed at night with a tuft of grass. The calf and pig were seen as inmates, while the little furniture that appeared, was either festooned with strings of dried fish, or crossed with a perch for the fowls to roost on.

A different scene, however, presented itself, as we anchored the next day in the commodious harbour of Stromness. The view of the town, with the surrounding cultivated parts of the country, and the Hoy Hill, is striking and romantic, and as our stay here was for a few days, I accepted an invitation to the Manse, from the kind and worthy minister of Hoy, and ascended with him the hill, of about 1620 feet high.

The sabbath we spent at sea was a delight to me, from the arrangement made by the captain for the attendance of the passengers and part of the crew on divine worship, both morning and afternoon. Another sabbath had now returned, and the weather being fair, all were summoned to attend on the quarter deck. We commenced the service by singing the Old Hundredth Psalm, and our voices being heard by the crews of several ships, lying near to us at anchor, they were seen hurrying on deck from below, so as to present to us a most interesting and gratifying sight—

""We stood, and under open sky adored

There appeared to be a solemn impression; and I trust that religion was felt among us as a divine reality....