The Seven Great Monarchies Of The Ancient Eastern World, Vol 6. (of 7): Parthia The History, Geography, And Antiquities Of Chaldaea, Assyria, Babylon, Media, Persia, Parthia, And Sassanian or New Persian Empire; With Maps and Illustrations. 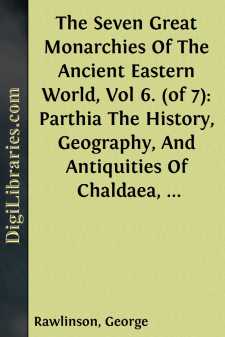 The broad tract of desert which, eastward of the Caspian Sea, extends from the Mougbojar hills to the Indian Ocean, a distance of above 1500 miles, is interrupted about midway by a strip of territory possessing features of much beauty and attraction. This strip, narrow compared to the desert on either side of it, is yet, looked at by itself, a region of no inconsiderable dimensions, extending, as it does from east to west, a distance of 320, and from north to south of nearly 200 miles. The mountain chain, which running southward of the Caspian, skirts the great plateau of Iran, or Persia, on the north, broadens out, after it passes the south-eastern corner of the sea, into a valuable and productive mountain-region. Four or five distinct ranges here run parallel to one another, having between them latitudinal valleys, with glens transverse to their courses. The sides of the valleys are often well wooded; the flat ground at the foot of the hills is fertile; water abounds; and the streams gradually collect into rivers of a considerable size.

The fertile territory in this quarter is further increased by the extension of cultivation to a considerable distance from the base of the most southern of the ranges, in the direction of the Great Iranic desert. The mountains send down a number of small streams towards the south; and the water of these, judiciously husbanded by means of reservoirs and kanats, is capable of spreading fertility over a broad belt at the foot of the hills; which, left to nature, would be almost as barren as the desert itself, into which it would, in fact, be absorbed.

It was undoubtedly in the region which has been thus briefly described that the ancient home of the Parthians lay. In this neighborhood alone are found the geographic names which the most ancient writers who mention the Parthians connect with them. Here evidently the Parthians were settled at the time when Alexander the Great overran the East, and first made the Greeks thoroughly familiar with the Parthian name and territory. Here, lastly, in the time of the highest Parthian splendor and prosperity, did a province of the Empire retain the name of Parthyene, or Parthia Proper; and here, also, in their palmiest days, did the Parthian kings continue to have a capital and a residence.

Parthia Proper, however, was at no time coextensive with the region described. A portion of that region formed the district called Hyrcania; and it is not altogether easy to determine what were the limits between the two. The evidence goes, on the whole, to show that, while Hyrcania lay towards the west and north, the Parthian country was that towards the south and east, the valleys of the Ettrek and Gurghan constituting the main portions of the former, while the tracts east and south of those valleys, as far as the sixty-first degree of E. longitude, constituted the latter.

If the limits of Parthia Proper be thus defined, it will have nearly corresponded to the modern Persian province of Khorasan....