The Seven Great Monarchies Of The Ancient Eastern World, Vol 5. (of 7): Persia The History, Geography, And Antiquities Of Chaldaea, Assyria, Babylon, Media, Persia, Parthia, And Sassanian or New Persian Empire; With Maps and Illustrations. 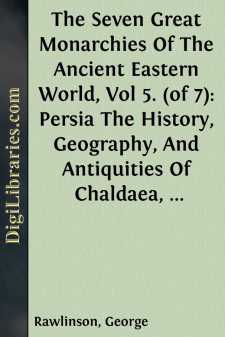 CHAPTER I. EXTENT OF THE EMPIRE.

The geographical extent of the Fifth Monarchy was far greater than that of any one of the four which had preceded it. While Persia Proper is a comparatively narrow and poor tract, extending in its greatest length only some seven or eight degrees (less than 500 miles), the dominions of the Persian kings covered a space fifty-six degrees long, and in places more than twenty degrees wide. The boundaries of their empire were the desert of Thibet, the Sutlej, and the Indus, on the east; the Indian Sea, the Persian Gulf, the Arabian and Nubian deserts, on the south; on the west, the Greater Syrtis, the Mediterranean, the Egean, and the Strymon river; on the north, the Danube, the Black Sea, the Caucasus, the Caspian, and the Jaxartes. Within these limits lay a territory, the extent of which from east to west was little less than 3000 miles, while its width varied between 500 and 1500 miles. Its entire area was probably not less than, two millions of square miles—or more than half that of modern Europe. It was thus at least eight times as large as the Babylonian Empire at its greatest extent, and was probably more than four times as large as the Assyrian.

The provinces included within the Empire may be conveniently divided into the Central, the Western, and the Eastern. The Central are Persia Proper, Susiana, Babylonia, Assyria, Media, the coast tract of the Caspian, and Sagartia, or the Great Desert. The Western are Paeonia, Thrace, Asia Minor, Armenia, Iberia, Syria and Phoenicia, Palestine, Egypt, and the Cyrenaica. The Eastern are Hyrcania, Parthia, Aria, Chorasmia, Sogdiana, Bactria, Scythia, Gandaria, Sattagydia, India, Paricania, the Eastern AEthiopia, and Mycia.

Of these countries a considerable number have been already described in these volumes. Susiana, Babylonia, Assyria, Media, the Caspian coast, Armenia, Syria, Phoenicia, and Palestine, belong to this class; and it may be assumed that the reader is sufficiently acquainted with their general features. It would therefore seem to be enough in the present place to give an account of the regions which have not yet occupied our attention, more especially of Persia Proper—the home of the dominant race.

Persia Proper seems to have corresponded nearly to that province of the modern Iran, which still bears the ancient name slightly modified, being called Farsistan or Fars. The chief important difference between the two is, that whereas in modern times the tract called Herman is regarded as a distinct and separate region, Carmania anciently was included within the limits of Persia. Persia Proper lay upon the gulf to which it has given name, extending from the mouth of the Tab (Oroatis) to the point where the gulf joins the Indian Ocean. It was bounded on the west by Susiana, on the north by Media Magna, on the east by Mycia, and on the south by the sea. Its length seems to have been about 450, and its average width about 250 miles. It thus contained an area of rather more than 100,000 square miles....