The Seven Great Monarchies Of The Ancient Eastern World, Vol 4. (of 7): Babylon The History, Geography, And Antiquities Of Chaldaea, Assyria, Babylon, Media, Persia, Parthia, And Sassanian or New Persian Empire; With Maps and Illustrations. 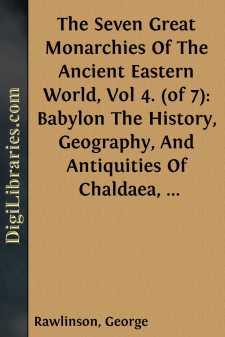 CHAPTER I. EXTENT OF THE EMPIRE.

The limits of Babylonia Proper, the tract in which the dominant power of the Fourth Monarchy had its abode, being almost identical with those which have been already described under the head of Chaldaea, will not require in this place to be treated afresh, at any length. It needs only to remind the reader that Babylonia Proper is that alluvial tract towards the mouth of the two great rivers of Western Asia—the Tigris and the Euphrates—which intervenes between the Arabian Desert on the one side, and the more eastern of the two streams on the other. Across the Tigris the country is no longer Babylonia, but Cissia, or Susiana—a distinct region, known to the Jews as Elam—the habitat of a distinct people. Babylonia lies westward of the Tigris, and consists of two vast plains or flats, one situated between the two rivers, and thus forming the lower portion of the "Mesopotamia" of the Greeks and Romans—the other interposed between the Euphrates and Arabia, a long but narrow strip along the right bank of that abounding river. The former of these two districts is shaped like an ancient amphora, the mouth extending from Hit to Samarah, the neck lying between Baghdad and Ctesiphon on the Tigris, Mohammed and Mosaib on the Euphrates, the full expansion of the body occurring between Serut and El Khithr, and the pointed base reaching down to Kornah at the junction of the two streams. This tract, the main region of the ancient Babylonia, is about 320 miles long, and from 20 to 100 broad. It may be estimated to contain about 18,000 square miles. The tract west of the Euphrates is smaller than this. Its length, in the time of the Babylonian Empire, may be regarded as about 350 miles, its average width is from 25 to 30 miles, which would give an area of about 9000 square miles. Thus the Babylonia of Nabopolassar and Nebuchadnezzar may be regarded as covering a space of 27,000 square miles—a space a little exceeding the area of the Low countries.

The small province included within these limits—smaller than Scotland or Ireland, or Portugal or Bavaria—became suddenly, in the latter half of the seventh century B.C., the mistress of an extensive empire. On the fall of Assyria, about B.C. 625, or a little later, Media and Babylonia, as already observed, divided between them her extensive territory. It is with the acquisitions thus made that we have now to deal. We have to inquire what portion exactly of the previous dominions of Assyria fell to the lot of the adventurous Nabopolassar, when Nineveh ceased to be—what was the extent of the territory which was ruled from Babylon in the latter portion of the seventh and the earlier portion of the sixth century before our era?

Now the evidence which we possess on this point is threefold. It consists of certain notices in the Hebrew Scriptures, contemporary records of first-rate historical value; of an account which strangely mingles truth with fable in one of the books of the Apocrypha; and of a passage of Berosus preserved by Josephus in his work against Apion....