The Seven Great Monarchies Of The Ancient Eastern World, Vol 3. (of 7): Media The History, Geography, And Antiquities Of Chaldaea, Assyria, Babylon, Media, Persia, Parthia, And Sassanian or New Persian Empire; With Maps and Illustrations. 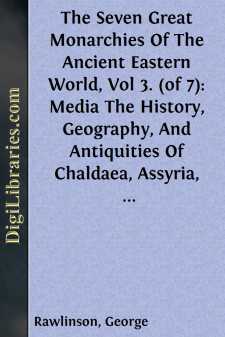 CHAPTER I. DESCRIPTION OF THE COUNTRY.

Along the eastern flank of the great Mesopotamian lowland, curving round it on the north, and stretching beyond it to the south and the south-east, lies a vast elevated region, or highland, no portion of which appears to be less than 3000 feet above the sea-level. This region may be divided, broadly, into two tracts, one consisting of lofty mountainous ridges, which form its outskirts on the north and on the west; the other, in the main a high flat table-land, extending from the foot of the mountain chains, southward to the Indian Ocean, and eastward to the country of the Afghans. The western mountain-country consists, as has been already observed, of six or seven parallel ridges, having a direction nearly from the north-west to the south-east, enclosing between them, valleys of great fertility, and well watered by a large number of plentiful and refreshing streams. This district was known to the ancients as Zagros, while in modern geography it bears the names of Kurdistan and Luristan. It has always been inhabited by a multitude of warlike tribes, and has rarely formed for any long period a portion of any settled monarchy. Full of torrents, of deep ravines, or rocky summits, abrupt and almost inaccessible; containing but few passes, and those narrow and easily defensible; secure, moreover, owing to the rigor of its climate, from hostile invasion during more than half the year; it has defied all attempts to effect its permanent subjugation, whether made by Assyrians, Persians, Greeks, Parthians, or Turks, and remains to this day as independent of the great powers in its neighborhood as it was when the Assyrian armies first penetrated its recesses. Nature seems to have constructed it to be a nursery of hardy and vigorous men, a stumbling-block to conquerors, a thorn in the side of every powerful empire which arises in this part of the great eastern continent.

The northern mountain country—known to modern geographers as Eiburz—is a tract of far less importance. It is not composed, like Zagros, of a number of parallel chains, but consists of a single lofty ridge, furrowed by ravines and valleys, from which spurs are thrown out, running in general at right angles to its axis. Its width is comparatively slight; and instead of giving birth to numerous large rivers, it forms only a small number of insignificant streams, often dry in summer, which have short courses, being soon absorbed either by the Caspian or the Desert. Its most striking feature is the snowy peak of Demavend, which impends over Teheran, and appears to be the highest summit in the part of Asia west of the Himalayas.

The elevated plateau which stretches from the foot of those two mountain regions to the south and east is, for the most part, a flat sandy desert, incapable of sustaining more than a sparse and scanty population. The northern and western portions are, however, less arid than the east and south, being watered to some distance by the streams that descend from Zagros and Elburz, and deriving fertility also from the spring rains....