The Seven Great Monarchies Of The Ancient Eastern World, Vol 2. (of 7): Assyria The History, Geography, And Antiquities Of Chaldaea, Assyria, Babylon, Media, Persia, Parthia, And Sassanian or New Persian Empire; With Maps and Illustrations. 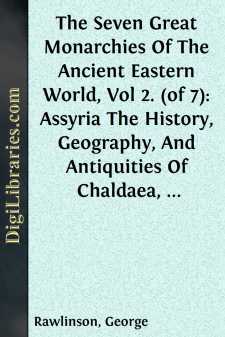 CHAPTER I. DESCRIPTION OF THE COUNTRY.

The site of the second—or great Assyrian-monarchy was the upper portion of the Mesopotamian valley. The cities which successively formed its capitals lay, all of them, upon the middle Tigris; and the heart of the country was a district on either side that river, enclosed within the thirty-fifth and thirty-seventh parallels. By degrees these limits were enlarged; and the term Assyria came to be used, in a loose and vague way, of a vast and ill-defined tract extending on all sides from this central region. Herodotus considered the whole of Babylonia to be a mere district of Assyria. Pliny reckoned to it all Mesopotamia. Strabo gave it, besides these regions, a great portion of Mount Zagros (the modern Kurdistan), and all Syria as far as Cilicia, Judaea, and Phoenicia.

If, leaving the conventional, which is thus vague and unsatisfactory, we seek to find certain natural limits which we may regard as the proper boundaries of the country, in two directions we seem to perceive an almost unmistakable line of demarcation. On the east the high mountain-chain of Zagros. penetrable only in one or two places, forms a barrier of the most marked character, and is beyond a doubt the natural limit for which we are looking. On the south a less striking, but not less clearly defined, line—formed by the abutment of the upper and slightly elevated plain on the alluvium of the lower valley—separates Assyria from Babylonia, which is best regarded as a distinct country. In the two remaining directions, there is more doubt as to the most proper limit. Northwards,we may either view Mount Masius as the natural boundary, or the course of the Tigris from Diarbekr to Til, or even perhaps the Armenian mountain-chain north of this portion of the Tigris, from whence that river receives its early tributaries. Westward, we might confine Assyria to the country watered by the affluents of the Tigris, or extend it so as to in elude the Khabour and its tributaries, or finally venture to carry it across the whole of Mesopotamia, and make it be bounded by the Euphrates. On the whole it is thought that in both the doubted cases the wider limits are historically the truer ones. Assyrian remains cover the entire country between the Tigris and the Khabour, and are frequent on both banks of the latter stream, giving unmistakable indications of a long occupation of that region by the great Mesopotamian people. The inscriptions show that even a wider tract was in process of time absorbed by the conquerors; and if we are to draw a line between the country actually taken into Assyria, and that which was merely conquered and held in subjection, we can select no better boundary than the Euphrates westward, and northward the snowy mountain-chain known to the ancients as Mons Niphates.

If Assyria be allowed the extent which is here assigned to her, she will be a country, not only very much larger than Chaldaea or Babylonia, but positively of considerable dimensions....