The Seven Great Monarchies Of The Ancient Eastern World, Vol 1. (of 7): Chaldaea The History, Geography, And Antiquities Of Chaldaea, Assyria, Babylon, Media, Persia, Parthia, And Sassanian or New Persian Empire; With Maps and Illustrations. 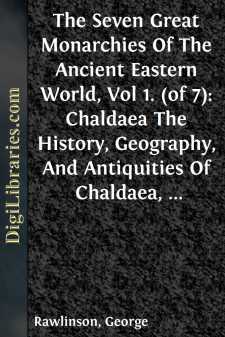 CHAPTER I. GENERAL VIEW OF THE COUNTRY.

"Behold the land of the Chaldaeans."—ISAIAH xxiii. 13.

The broad belt of desert which traverses the eastern hemisphere, in a general direction from west to east (or, speaking more exactly, of W. S. W. to N. E. E.), reaching from the Atlantic on the one hand nearly to the Yellow Sea on the other, is interrupted about its centre by a strip of rich vegetation, which at once breaks the continuity of the arid region, and serves also to mark the point where the desert changes its character from that of a plain at a low level to that of an elevated plateau or table-land. West of the favored district, the Arabian and African wastes are seas of sand, seldom raised much above, often sinking below, the level of the ocean; while east of the same, in Persia, Kerman, Seistan, Chinese Tartary, and Mongolia, the desert consists of a series of plateaus, having from 3000 to nearly 10,000 feet of elevation. The green and fertile region, which is thus interposed between the "highland" and the "lowland" deserts, participates, curiously enough, in both characters. Where the belt of sand is intersected by the valley of the Nile, no marked change of elevation occurs; and the continuous low desert is merely interrupted by a few miles of green and cultivable surface, the whole of which is just as smooth and as flat as the waste on either side of it. But it is otherwise at the more eastern interruption. There the verdant and productive country divides itself into two tracts, running parallel to each other, of which the western presents features not unlike those that characterize the Nile valley, but on a far larger scale; while the eastern is a lofty mountain region, consisting for the most part of five or six parallel ranges, and mounting in many places far above the level of perpetual snow.

It is with the western or plain tract that we are here concerned. Between the outer limits of the Syro-Arabian desert and the foot of the great mountain range of Kurdistan and Luristan intervenes a territory long famous in the world's history, and the chief site of three out of the five empires of whose history, geography, and antiquities it is proposed to treat in the present volumes. Known to the Jews as Aram-Naharaim, or "Syria of the two rivers;" to the Greeks and Romans as Mesopotamia, or "the between-river country;" to the Arabs as Al-Jezireh, or "the island," this district has always taken its name from the streams, which constitute its most striking feature, and to which, in fact, it owes its existence. If it were not for the two great rivers—the Tigris and Euphrates—with their tributaries, the more northern part of the Mesopotamian lowland would in no respect differ from the Syro-Arabian desert on which it adjoins, and which in latitude, elevation, and general geological character it exactly resembles. Towards the south, the importance of the rivers is still greater; for of Lower Mesopotamia it may be said, with more truth than of Egypt, that it is "an acquired land," the actual "gift" of the two streams which wash it on either side; being, as it is, entirely a recent formation—a deposit which the streams have made in the shallow waters of a gulf into which they have flowed for many ages....