The Seminole Indians of Florida Fifth Annual Report of the Bureau of Ethnology to the Secretary of the Smithsonian Institution, 1883-84, Government Printing Office, Washington, 1887, pages 469-532 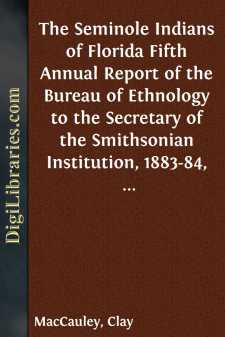 Sir: During the winter of 1880-’81 I visited Florida, commissioned by you to inquire into the condition and to ascertain the number of the Indians commonly known as the Seminole then in that State. I spent part of the months of January, February, and March in an endeavor to accomplish this purpose. I have the honor to embody the result of my work in the following report.

On account of causes beyond my control the paper does not treat of these Indians as fully as I had intended it should. Owing to the ignorance prevailing even in Florida of the locations of the homes of the Seminole and also to the absence of routes of travel in Southern Florida, much of my time at first was consumed in reaching the Indian country. On arriving there, I found myself obliged to go among the Indians ignorant of their language and without an interpreter able to secure me intelligible interviews with them except in respect to the commonest things. I was compelled, therefore, to rely upon observation and upon very simple, perhaps sometimes misunderstood, speech for what I have here placed on record. But while the report is only a sketch of a subject that would well reward thorough study, it may be found to possess value as a record of facts concerning this little-known remnant of a once powerful people.

I have secured, I think, a correct census of the Florida Seminole by name, sex, age, gens, and place of living. I have endeavored to present a faithful portraiture of their appearance and personal characteristics, and have enlarged upon their manners and customs, as individuals and as a society, as much as the material at my command will allow; but under the disadvantageous circumstances to which allusion has already been made, I have been able to gain little more than a superficial and partial knowledge of their social organization, of the elaboration among them of the system of gentes, of their forms and methods of government, of their tribal traditions and modes of thinking, of their religious beliefs and practices, and of many other things manifesting what is distinctive in the life of a people. For these reasons I submit this report more as a guide for future investigation than as a completed result.

At the beginning of my visit I found but one Seminole with whom I could hold even the semblance of an English conversation. To him I am indebted for a large part of the material here collected. To him, in particular, I owe the extensive Seminole vocabulary now in possession of the Bureau of Ethnology. The knowledge of the Seminole language which I gradually acquired enabled me, in my intercourse with other Indians, to verify and increase the information I had received from him.

In conclusion, I hope that, notwithstanding the unfortunate delays which have occurred in the publication of this report, it will still be found to add something to our knowledge of this Indian tribe not without value to those who make man their peculiar study....