The Sacred Formulas of the Cherokees Seventh Annual Report of the Bureau of Ethnology to the Secretary of the Smithsonian Institution, 1885-1886, Government Printing Office, Washington, 1891, pages 301-398 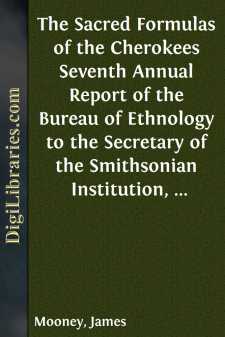 The sacred formulas here given are selected from a collection of about six hundred, obtained on the Cherokee reservation in North Carolina in 1887 and 1888, and covering every subject pertaining to the daily life and thought of the Indian, including medicine, love, hunting, fishing, war, self-protection, destruction of enemies, witchcraft, the crops, the council, the ball play, etc., and, in fact, embodying almost the whole of the ancient religion of the Cherokees. The original manuscripts, now in the possession of the Bureau of Ethnology, were written by the shamans of the tribe, for their own use, in the Cherokee characters invented by Sikwâ´ya (Sequoyah) in 1821, and were obtained, with the explanations, either from the writers themselves or from their surviving relatives.

Some of these manuscripts are known to be at least thirty years old, and many are probably older. The medical formulas of all kinds constitute perhaps one-half of the whole number, while the love charms come next in number, closely followed by the songs and prayers used in hunting and fishing. The great number of love charms will doubtless be a surprise to those who have been educated in the old theory that the Indian is insensible to the attractions of woman. The comparatively small number of war formulas is explained by the fact that the last war in which the Cherokees, as a tribe, were engaged on their own account, closed with the Revolutionary period, so that these things were well nigh forgotten before the invention of the alphabet, a generation later. The Cherokees who engaged in the Creek war and the late American civil war fought in the interests of the whites, and their leaders were subordinated to white officers, hence there was not the same opportunity for the exercise of shamanistic rites that there would have been had Indians alone been concerned. The prayers for hunting, fishing, and the ball play being in more constant demand, have been better preserved.

These formulas had been handed down orally from a remote antiquity until the early part of the present century, when the invention of the Cherokee syllabary enabled the priests of the tribe to put them into writing. The same invention made it possible for their rivals, the missionaries, to give to the Indians the Bible in their own language, so that the opposing forces of Christianity and shamanism alike profited by the genius of Sikwâya. The pressure of the new civilization was too strong to be withstood, however, and though the prophets of the old religion still have much influence with the people, they are daily losing ground and will soon be without honor in their own country.

Such an exposition of the aboriginal religion could be obtained from no other tribe in North America, for the simple reason that no other tribe has an alphabet of its own in which to record its sacred lore. It is true that the Crees and Micmacs of Canada and the Tukuth of Alaska have so-called alphabets or ideographic systems invented for their use by the missionaries, while, before the Spanish conquest, the Mayas of Central America were accustomed to note down their hero legends and priestly ceremonials in hieroglyphs graven upon the walls of their temples or painted upon tablets made of the leaves of the maguey....