The Romance of the Colorado River The Story of its Discovery in 1840, with an Account of the Later Explorations, and with Special Reference to the Voyages of Powell through the Line of the Great Canyons 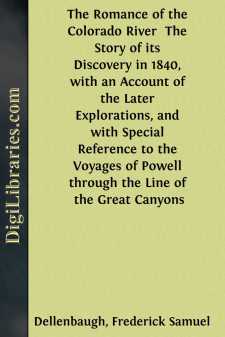 The Secret of the Gulf—Ulloa, 1539, One of the Captains of Cortes, Almost Solves it, but Turns Back without Discovering—Alarcon, 1540, Conquers.

In every country the great, rivers have presented attractive pathways for interior exploration—gateways for settlement. Eventually they have grown to be highroads where the rich cargoes of development, profiting by favouring tides, floated to the outer world. Man, during all his wanderings in the struggle for subsistence, has universally found them his friends and allies. They have yielded to him as a conquering stranger; they have at last become for him foster-parents. Their verdant banks have sheltered and protected him; their skies have smiled upon his crops. With grateful memories, therefore, is clothed for us the sound of such river names as Thames, Danube, Hudson, Mississippi. Through the centuries their kindly waters have borne down ancestral argosies of profit without number, establishing thus the wealth and happiness of the people. Well have rivers been termed the "Arteries of Commerce"; well, also, may they be considered the binding links of civilisation.

Then, by contrast, it is all the more remarkable to meet with one great river which is none of these helpful things, but which, on the contrary, is a veritable dragon, loud in its dangerous lair, defiant, fierce, opposing utility everywhere, refusing absolutely to be bridled by Commerce, perpetuating a wilderness, prohibiting mankind's encroachments, and in its immediate tide presenting a formidable host of snarling waters whose angry roar, reverberating wildly league after league between giant rock-walls carved through the bowels of the earth, heralds the impossibility of human conquest and smothers hope. From the tiny rivulets of its snowy birth to the ferocious tidal bore where it dies in the sea, it wages a ceaseless battle as sublime as it is terrible and unique. Such is the great Colorado River of the West, rising amidst the fountains of the beautiful Wind River Mountains of Wyoming, where also are brought forth the gentler Columbia and the mighty, far-reaching Missouri. Whirling down ten thousand feet in some two thousand miles, it meets the hot level of the Red Sea, once the Sea of Cortes, now the Gulf of California, in tumult and turmoil. In this long run it is cliff bound nine-tenths of the way, and the whole country drained by it and its tributaries has been wrought by the waters and winds of ages into multitudinous plateaus and canyons. The canyons of its tributaries often rival in grandeur those of the main stream itself, and the tributaries receive other canyons equally magnificent, so that we see here a stupendous system of gorges and tributary gorges, which, even now bewildering, were to the early pioneer practically prohibitory. Water is the master sculptor in this weird, wonderful land, yet one could there die easily of thirst. Notwithstanding the gigantic work accomplished, water, except on the river, is scarce. Often for months the soil of the valleys and plains never feels rain; even dew is unknown....