The Romance of Mathematics Being the Original Researches of a Lady Professor of Girtham College in Polemical Science, with some Account of the Social Properties of a Conic; Equations to Brain Waves; Social Forces; and the Laws of Political Motion. 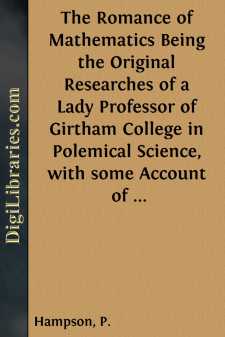 Oh, why should I be doomed to the degradation of bearing such a foolish appellation! A Girtham Girl! I suppose we have to thank that fiend of invention who is responsible for most of the titular foibles and follies of mankind—artful Alliteration. The two G’s, people imagine, run so well together; and it is wonderful that they do not append some other delectable title, such as ‘The Gushing Girl of Girtham,’ or ‘The Glaring Girl of Glittering [2] Girtham.’ O Alliteration! Alliteration! what crimes have been wrought in thy name! Little dost thou think of the mischief thou hast done, flooding the world with meaningless titles and absurd phrases. How canst thou talk of ‘Lyrics of Loneliness,’ ‘Soliloquies of Song,’ ‘Pearls of the Peerage’? Why dost thou stay thine hand? We long for thee to enrich the world with ‘Dreams of a Dotard,’ the ‘Dog Doctor’s Daughters,’ and other kindred works. Exercise thine art on these works of transcendent merit, but cease to style thy humble, but rebellious, servant a Girtham Girl!

But what’s in a name? Let the world’s tongue wag. I am a student, a hard-working, book-devouring, never-wearied student, who burns her midnight oil, and drinks the strong bohea, to keep her awake during the long hours of toil, like any Oxford or Cambridge undergraduate. I often wonder whether these mighty warriors in the lists—the class lists, I mean—really work half so hard as we poor unfortunate ‘Girls of Girtham.’ Now that I am writing in strict [3] confidence, so that not even the walls can hear the scratchings of my pen, or understand the meaning of all this scribbling, I beg to state that I have my serious doubts upon the subject; and when last I attended a soirée of the Anthropological Society, sounds issued forth from the windows of the snug college rooms, which could not be taken as evidences of profound and undisturbed study.

Sometimes I glance at the examination papers set for these hard-working students, in order that they may attain the glorious degree of B.A., and astonish their sisters, cousins, and aunts by the display of these magic letters and all-resplendent hood. And again I say in strict confidence that if this same glorious hood does not adorn the back of each individual son of Alma Mater, he ought to be ashamed of himself, and not to fail to assume a certain less dignified, but expressive, three-lettered qualification. But before those Tripos Papers I bow my head in humble adoration. They sometimes take my breath away even to read the terrible excruciating [4] things, which seem to turn one’s brain round and round, and contort the muscles of one’s face, and stop the pulsation of one’s heart, when one tries to grasp the horrid things.

Here is a fair example of the ingenuity of the hard-hearted examiners, who resemble the inquisitors presiding over the tortures of the rack, and giving the hateful machine just one turn more by way of bestowing a parting benediction on their miserable victims:

‘A uniform rod’ (it is a marvellous act of mercy that the examiner invented it uniform; it is strange that its thickness did not vary in some complicated manner, and become a veritable birch-rod!) ‘of length 2c, rests in stable equilibrium’ (stable! another act of leniency!), ‘with its lower end at the vertex of a cycloid whose plane is vertical’ (why not incline it at an angle of 30°?) ‘and vertex downwards, and passes through a small, smooth, fixed ring situated in the axis at a distance b from the vertex. Show that if the equilibrium be slightly disturbed, the rod will [5] perform small oscillations with its lower end on the arc of the cycloid in the time

where 2a is the length of the axis of the cycloid.’

A sweet pretty problem, truly! And there are hundreds of the same kind—birch-rods for every back! How the examiner must have rejoiced when he invented this diabolical rod, with its equilibrium, its oscillations, its cycloid, and other tormenting accessories....