The Queen-like Closet or Rich Cabinet Stored with all manner of rare receipts for preserving, candying and cookery. Very pleasant and beneficial to all ingenious persons of the female sex 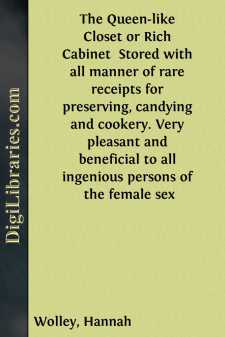 Take three Pints of Sack, three Pints of White Wine, one quart of the Spirit of Wine, one quart of the juice of Celandine leaves, of Melilot-flowers, Cardamum-seeds, Cubebs, Galingale, Nutmegs, Cloves, Mace, Ginger, two Drams of each; bruise them, and mix them with the Wine and Spirits, let it stand all night in the Still, not an Alembeck, but a common Still, close stopped with Rye Paste; the next morning make a slow fire in the Still, and all the while it is stilling, keep a wet Cloth about the neck of the Still, and put so much white Sugar Candy as you think fit into the Glass where it drops.

2. The Plague-Water which was most esteemed of in the late great Visitation.

Take three Pints of Muskadine, boil therein one handful of Sage, and one handful of Rue until a Pint be wasted, then strain it out, and set it over the Fire again.

Take one Spoonful at a time, morning and evening always warm, if you be already diseased; if not, once a day is sufficient all the Plague time.

It is most excellent Medicine, and never faileth, if taken before the heart be utterly mortified with the Disease, it is also good for the Small Pox, Measles, or Surfets.

Take one Gallon of good Claret Wine, then take Ginger, Galingale, Cinnamon, Nutmegs, Grains, Cloves, Anniseeds, Fennel-seeds, Caraway-seeds, of each one dram; then take Sage, Mint, Red-Rose leaves, Thyme, Pellitory of the Wall, Rosemary, Wild Thyme, Camomile, Lavander, of each one handful, bruise the Spices small and beat the Herbs, and put them into the Wine, and so let stand twelve hours close covered, stirring it divers times, then still it in an Alembeck, and keep the best Water by it self, and so keep every Water by it self; the first you may use for aged People, the other for younger.

This most excellent Water was from Dr. Chambers, which he kept secret till he had done many Cures therewith; it comforteth the Vital Spirits; it helpeth the inward Diseases that come of Cold; the shaking of the Palsie; it helpeth the Conception of Women that are barren; it killeth the Worms within the Body, helpeth the Stone within the Bladder; it cureth the Cold, Cough, and Tooth-ach, and comforteth the Stomach; it cureth the Dropsie, and cleanseth the Reins; it helpeth speedily the stinking Breath; whosoever useth this Water, it preserveth them in good health, and maketh seem young very long; for it comforteth Nature very much; with this water Dr. Chambers preserved his own life till extreme Age would suffer him neither to go nor stand one whit, and he continued five years after all Physicians judged he could not live; and he confessed that when he was sick at any time, he never used any other Remedy but this Water, and wished his Friends when he lay upon his Deth-Bed to make use of it for the preservation of their Health....