The Practical Values of Space Exploration Report of the Committee on Science and Astronautics, U.S. House of Representatives, Eighty-Sixth Congress, Second Session

by United States. Congress. House. Committee on Science and Astronautics. 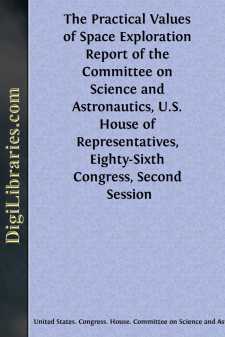 This report has been undertaken for a special reason. It is to explain to the taxpayer just why so many of his dollars are going into the American effort to explore space, and to indicate what he can expect in return which is of value to him.

Such an explanation, even after 2 years of relatively high-geared activity in the space exploration field, appears to be warranted. There is still a segment of the U.S. population which has little, if any, notion of the values that the space program has for the average citizen. To these people the expenditure of billions of dollars on missiles, rockets, satellites, Moon probes, and other space activities remains something of a mystery—particularly when so many other worthy projects throughout the land may be slowed or stalled for lack of funds.

If, therefore, the practical value of the American space program is being questioned, it is a question which needs to be answered.

It is interesting to note that the problem is not unique to the United States. In the Soviet Union, which counts itself as the world's prime investigator of space, there is likewise an element of citizenry which finds itself puzzled over the U.S.S.R.'s penchant for the interplanetary reaches.

"What do sputniks give to a person like me?" a Russian workman complained in a letter which Pravda published on its front page. "So much money is spent on sputniks it makes people gasp. If there were no sputniks the Government could cut the cost of cloth for an overcoat in half and put a few electric flatirons in the stores. Rockets, rockets, rockets. Who needs them now?"

It goes without saying that the workman was severely chastised by the Soviet newspaper, but his point was made.

No matter where taxpayers live they want to know—and are entitled to know—what good a program of space exploration is to them.

During the 1960's it is expected that the U.S. Government will spend anywhere from $30 to $50 billion on space exploration for all purposes, civilian and military. It is the intent of this report to delineate in lay language, and in terms which will be meaningful to those who have not followed the American space program closely, the reasons for this great investment and the probable returns.

Figure 1.—A single shot of the 8-barreled Saturn of the future will cost millions of dollars, maybe tens of millions. What makes it worthwhile for the taxpayer? I. The Unseen Values

The United States has not embarked upon its formidable program of space exploration in order to make or perpetuate a gigantic astronautic boondoggle. There are good reasons, hard reasons for this program. But, in essence, they all boil down to the fact that the program is expected to produce a number of highly valuable payoffs. It not only is expected to do so, it is doing so right now.

Many of the beneficial results can be identified.

Those already showing up are detailed in the sections of this report which follow. They include the most urgent and precious of all commodities—national security....