The Pirates of Panama or, The Buccaneers of America; a True Account of the Famous Adventures and Daring Deeds of Sir Henry Morgan and Other Notorious Freebooters of the Spanish Main

by A. O. (Alexandre Olivier) Exquemelin 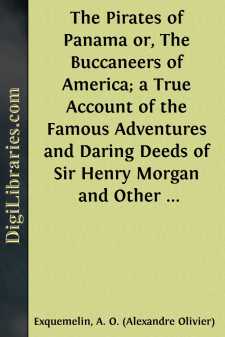 This volume was originally written in Dutch by John Esquemeling, and first published in Amsterdam in 1678 under the title of De Americaeneche Zee Roovers. It immediately became very popular and this first hand history of the Buccaneers of America was soon translated into the principal European languages. The first English edition was printed in 1684.

Of the author, John Esquemeling, very little is known although it is generally conceded that he was in all probability a Fleming or Hollander, a quite natural supposition as his first works were written in the Dutch language. He came to the island of Tortuga, the headquarters of the Buccaneers, in 1666 in the employ of the French West India Company. Several years later this same company, owing to unsuccessful business arrangements, recalled their representatives to France and gave their officers orders to sell the company's land and all its servants. Esquemeling then a servant of the company was sold to a stern master by whom he was treated with great cruelty. Owing to hard work, poor food and exposure he became dangerously ill, and his master seeing his weak condition and fearing to lose the money Esquemeling had cost him resold him to a surgeon. This new master treated him kindly so that Esquemeling's health was speedily restored, and after one year's service he was set at liberty upon a promise to pay his benefactor, the surgeon, 100 pieces of eight at such a time as he found himself in funds.

Once more a free man he determined to join the pirates and was received into their society and remained with them until 1672. Esquemeling served the Buccaneers in the capacity of barber-surgeon, and was present at all their exploits. Little did he suspect that his first hand observations would some day be cherished as the only authentic and true history of the Buccaneers and Marooners of the Spanish Main.

From time to time new editions of this work have been published, but in many cases much new material, not always authentic, has been added and the result has been to mar the original narrative as set forth by Esquemeling. In arranging this edition, the original English text only has been used, and but few changes made by cutting out the long and tedious description of plant and animal life of the West Indies of which Esquemeling had only a smattering of truth. But, the history of Captain Morgan and his fellow buccaneers is here printed almost identical with the original English translation, and we believe it is the first time this history has been published in a suitable form for the juvenile reader with no loss of interest to the adult.

The world wide attention at this time in the Isthmus of Panama and the great canal connecting the Atlantic with the Pacific Ocean lends to this narrative an additional stimulus. Here are set forth the deeds of daring of the wild freebooters in crossing the isthmus to attack the cities, Puerto Bellow and Panama. The sacking and burning of these places accompanied by pillage, fire, and treasure seeking both on land and on sea form exciting reading....