The Philippine Islands, 1493-1898 - Volume 24 of 55 1630-34 Explorations by Early Navigators, Descriptions of the Islands and Their Peoples, Their History and Records of the Catholic Missions, As Related in Contemporaneous Books and Manuscripts, Showing the Political, Economic, Commercial and Religious Conditions of Those Islands from Their Earliest Relations with European Nations to the Close of the Nineteenth Century 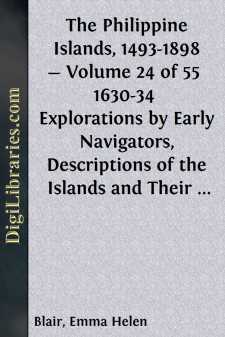 Of the first election of our father Fray Lorenzo de León

With the fourth of May, 1596, all the capitular religious of this province of SantГѓ­simo Nombre de Jesús of Filipinas assembled, and without much debate cast their votes for father Fray Lorenzo de León, a native of the city of Granada, and son of the house at Méjico, whose learning, ability to preach, and other good qualities made him very well known, and caused him to be elected without opposition. Accordingly he won the contest as provincial, to the general liking of all the religious of the province, both those voting and those who had no vote. All were assured that he would govern rightly because of his prudence, and beyond doubt his government was all that. The province during his term had the honor and repute that was proper. Since his method of procedure was alike for all the religious, it was necessary in the following chapter to retire the provincial to his devotion; and one may infer that in that it acted more for the common welfare than its own.

Thereupon, the voting religious being assembled, cast their votes, without any opposition, for Fray Juan de Montesdoza, son of the house at Méjico, a native of the city of Utrera, near Sevilla in Andalucia. He was a most excellent provincial, for one always recognized in him a remarkable integrity of morals, and he was much given to prayer and divine worship. He endeavored as earnestly as possible to give his whole being to the order, and not to be found lacking in his ministry. He visited his entire province whenever possible; and that which has always been most annoying to the provincials in respect to its visitation—namely, the province of Bisayas—was not troublesome to him, for he visited it. He did not hesitate at the suffering or the dangers of navigation, which at times is wont to be especially perilous, because of the many storms that generally invade the islands, and the not few enemies. He was considered lost, for he was not heard of for more than four months; for they wrote from the Bisayas that he had already embarked for Manila, and he had not arrived. Finally, the Lord was pleased to bring him to our doors when he was least expected. God is a Father of pity, and attends to His children (and more to His servants) when they find themselves most in need of Him. He was received in the convent of Manila by many people, for all revered him as a servant of God, loved him as a father, and respected him as a true prelate.

On the twenty-second of April, 1602, the chapter was convened in the house at Manila. Father Fray Pedro Arce, who is now bishop of the city of Santisimo Nombre de Jesús, and who has twice governed the archbishopric of Manila, was elected in it. Father Fray Mateo de Mendoza presided at that election, while father Fray Juan de Montesdoza was the absolute provincial, as we call it, or the freed one, since now he is no longer provincial. The first definitor was Fray AgustГѓ­n de TapГѓ­a, the second, Fray Bernabé de Villalobos, the third, Fray Diego de Zerrabe, and the fourth, Fray Diego de Salcedo....