The Philippine Islands, 1493-1898 - Volume 23 of 55 1629-30 Explorations by early navigators, descriptions of the islands and their peoples, their history and records of the catholic missions, as related in contemporaneous books and manuscripts, showing the political, economic, commercial and religious conditions of those islands from their earliest relations with European nations to the close of the nineteenth century. 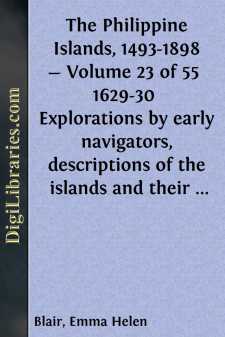 [Medina’s narrative opens with the expedition of Legazpi, and the part played therein by the Augustinian Andrés de Urdaneta and his companions. Felipe II, having determined upon an expedition to the western islands, “entrusted the matter to the viceroy of Nueva España, at that time Don Luis de Velasco, a man of so great worth in all matters, that he has never received adequate praise. The king gave him in everything ample and most complete authority to appoint a commander and officials, and to make with them whatever agreements and covenants seemed most advantageous to him and to the royal service. They were always to listen to the advice of father Fray Andrés de Urdaneta.... His Majesty stipulated that Urdaneta should, at all hazards, be persuaded to undertake the expedition in person,” taking with him such other religious of the same order as he thought best. The king wrote to Urdaneta as follows:]

I The King. To the devout father Fray Andrés de [123] Urdaneta, of the Order of St. Augustine: I have been informed that, while you were a layman, you accompanied the fleet of Loaysa, and passed through the Strait of Magallanes and the spice region, where you spent eight years in our service. And inasmuch as we have just charged Don Luis de Velasco, our viceroy of that Nueva España, to send two ships to discover the Western Islands in the direction of the Molucas, and to give them instructions how to proceed, in accordance with the instructions given to him; and as, on account of the great store of knowledge that you are said to possess of the affairs of that land, and since you understand, as you do, its navigation, and are a good cosmographer, it would be very conducive to excellent results, both in what relates to the said navigation, and to the service of our Lord, for you to accompany the said ships: I, therefore, ask and charge you to accompany the said ships, and to do what shall be ordered you by the said our viceroy. Beside the service that you will thus render to our Lord, I shall be very greatly served, and shall have account taken of this matter, so that you may receive the favors that offer. Valladolid, September 24, 1559.

[Of Urdaneta, father Fray Estéban de Salazar remarks that “his devotion and sanctity cannot be briefly told, while a book would be required for his military prowess and deeds.” He was the foremost navigator of the time, and “had added the wind called huracán by sailors to the compass. The sailors [124] believe that when this wind blows all the other winds, in number thirty-two, are blowing, and that only one wind results, with a whirling direction from pole to pole.” A brief review of Urdaneta’s life follows. His youth was largely spent in the Italian wars, and his later years in the South Sea. He accompanied Loaysa’s expedition in 1525. “Joined to his so wide experience was the fact that he was a man skilled in cosmography and astrology ......