The Philippine Islands, 1493-1898 - Volume 19 of 55 1620-1621 Explorations by early navigators, descriptions of the islands and their peoples, their history and records of the catholic missions, as related in contemporaneous books and manuscripts, showing the political, economic, commercial and religious conditions of those islands from their earliest relations with European nations to the close of the nineteenth century. 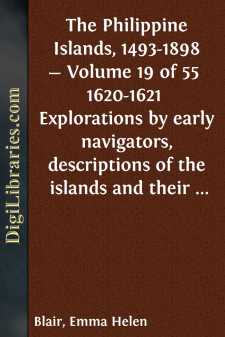 Reforms Needed in the Filipinas (concluded) Aid against the Dutch requested

Hernando de los Rios Coronel, procurator-general of the Filipinas Islands and of all their estates, declares that he came the past year to inform your Majesty and your royal Council of the Indias, in the name of those islands, of the desperate condition to which the Dutch enemy have brought them. Desiring that your Majesty understand the importance of the matter, he gave you a long printed relation in which he discussed points important for their recovery from the enemy and the expulsion of the latter from that archipelago. Your Majesty, upon seeing it, ordered a fleet to be prepared; but that fleet was so unfortunate as to be lost before beginning its voyage. Although your Council of the Indias is discussing the formation of another fleet to sail by way of the Strait of Magallanes, or by the new strait [i.e., of Le Maire], it cannot, if it leaves here any time in July (which is the earliest time when it can be sent from España) possibly arrive [at Filipinas] until one and one-half years from now—or a little less, if it has no bad luck. Now considering the watchfulness of the enemy, and the forces that they [26] are sending this year, namely, forty ships, which have left Olanda—whence can be inferred the importance to them of making themselves masters of those regions, since they are so persistent in their efforts, and incur so heavy expenses—he [i.e., Los Rios] advises you for the discharge of his conscience, and his obligation, and his duty as a good vassal of your Majesty, that there is urgent need that, notwithstanding the relief that your Council of the Indias is about to despatch by way of the straits, other help be furnished from Nueva España and Piru; of both men and money, and to employ this [aid from España] with as great care as the gravity of the matter requires, and to realize the fact that, were it lost, both Eastern and Western India would be endangered. They would be in great danger, as would also these kingdoms; for it would mean to permit the enemy to become so powerful and so rich as all know who are aware of the wealth of those regions. Besides, it would mean the extinction of whatever Christian element is there, and would shut the doors to the preaching of the gospel, which your Majesty and your ancestors have procured with so great glory and so many expenses. [That relief of Nueva España and Piru should be prepared] also, for if the relief [from España] should suffer an equal disaster with the last, and that country could not be succored, it would all be lost.

I petition your Majesty to order that this matter be considered, as a matter of so great importance; and that your president of the Indias call a conference of those most experienced in the Indias, so that they may discuss what measures can be taken most fitting for the relief of that country, and as speedily [27] as possible, where he [i.e., Los Rios] will also declare the measures that occur to him.

[Endorsed: “To the president of the Indias....