The Philippine Islands, 1493-1898 - Volume 18 of 55 1617-1620 Explorations by Early Navigators, Descriptions of the Islands and Their Peoples, Their History and Records of the Catholic Missions, as Related in Contemporaneous Books and Manuscripts, Showing the Political, Economic, Commercial and Religious Conditions of Those Islands from Their Earliest Relations with European Nations to the Close of the Nineteenth Century 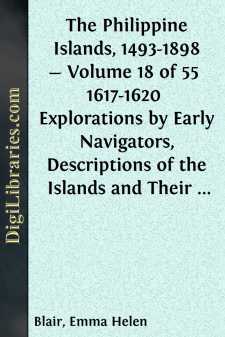 The enclosed papers were taken from the ships that were going last year to Nueva España. Those ships were despatched to make the voyage by way of Yndia; but as the Dutch enemy was lying at the entrances of this bay with his ten warships, it was not possible for the ships to leave, for it would have been only to have fallen, beyond all doubt, into his hands. In them I inform your Majesty of everything occurring up to their date. In this I shall inform you of what is new. The coming of this enemy caused the anxiety which was the reason—inasmuch as we had heard for a long time that he was coming; and that he would wait to seize the Chinese and Japanese ships, and prevent their entrance into the city with food—that, in order to frustrate those designs, I, with the advice of the Audiencia and the council of war, resolved to prepare seven galleons and to equip them as thoroughly as possible, so that they could go out to fight that enemy. When about to set this plan afoot, obstacles began to arise, because there was not a single real in the royal treasury, on account of the non-arrival of the ships from Nueva España; and because the country was in great need, and had no income except that collected from the Page 25licenses of the Sangleys. These were collected with great effort and difficulty, but the sum was all spent in a few days in the repair of these galleons. When there was nothing more to use, the ship expected from Nueva España arrived. It had put in at Japon, and brought more than eight hundred thousand pesos for the royal treasury and for the citizens. It was regarded as a great mercy of God that He should help this afflicted land in such necessity and extremity, and that He should keep this ship from falling into the hands of that enemy. After this the repairs and preparations of this fleet proceeded with great energy, and although innumerable obstacles continued to arise because the wood, rigging, rice, and other things necessary had to be conveyed by long detours, all difficulties were conquered by God’s help. To Him recourse was always had, through all the religious orders and the religious, so that His [Divine] Majesty should be pleased to aid this [our] cause against those rebels to His church and sacrament, and to your Majesty, and disturbers of the common peace. These joyous causes furnished ecclesiastical and secular motive to request me, with loud and frequent acclamations of joy, to hasten as quickly as possible the preparation of this fleet. Notwithstanding that it was detained, they said that it could go out; for they were assured that, since we had so large galleons, that enemy would not dare to await it, and that the flagship and almiranta were alone sufficient to drive away that enemy and prevent the damages that were expected so close at hand. They said that the preparations that were intended to be made would be useless, for, when they were finished, then the enemy would have already Page 26gone to Terrenate, enriched with his booty from the Chinese ships; and that damage would result from delay, while great expenses would have to be met from the royal treasury....