The Philippine Islands, 1493-1898 - Volume 17 of 55 1609-1616 Explorations by Early Navigators, Descriptions of the Islands and Their Peoples, Their History and Records of the Catholic Missions, as Related in Contemporaneous Books and Manuscripts, Showing the Political, Economic, Commercial and Religious Conditions of Those Islands from Their Earliest Relations with European Nations to the Close of the Nineteenth Century 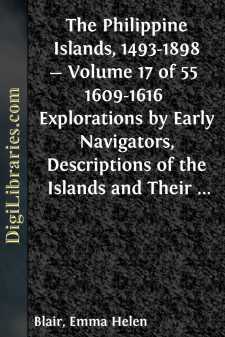 The present volume covers the seven years from 1609 to 1616, the leading subjects in the documents therein being commerce and navigation, missions, and ecclesiastical affairs. The commercial and navigation laws covering a quarter of a century previous to this period give incidentally much curious information on social and economic conditions in the islands. The outflow of silver from Nueva España to China via Manila still causes alarm; but it is evident that the suppression of the trade between Acapulco and Manila is not an infallible remedy for this difficulty. As it is, the islands are suffering from the injuries to their trade that the Dutch have inflicted, and from the ruinous expenses caused by their wars with these persistent enemies. No less do the Indians suffer from the exactions levied upon them for the public works and defense; but the home government attempts to lessen these burdens, and protect the natives from oppression. The missions of the Jesuits are reported as making rapid progress; and statistics of the work conducted by them and by the other religious orders give a view of the general missionary field. The Dominicans begin their college of Santo Tomás at Manila; and their officials urge upon the king the suppression of the Audiencia. The relations Page 10between the various orders appear to be not strictly harmonious. The power of the Spaniards in the Orient, and the future of the Philippine colony, are seriously menaced by the increasing gains of the Dutch in the Moluccas.

Various laws regarding the navigation and commerce of the Philippines are presented, in chronological order, dated 1583–1609. The sale of merchandise by pancada is to be retained, and regulations are made therefor. Trade between the American colonies with China or Filipinas is prohibited; and the citizens of Filipinas are granted a monopoly of the trade to Nueva España. But this is limited to a specified amount and only two ships may be sent annually. The goods thus sent to Nueva España must be consumed there. Copies of the merchandise registers of these vessels must be sent to the Council of the Indias. Persons who have been exiled to Filipinas must be compelled to reside there. No slaves may be taken thence to Nueva España, except a small and specified number allowed as servants of royal officials. The number of officers and men allowed to each ship is limited and specified. The soldiers sent must be effective and suitably equipped. The ships must not be stripped of their defenses by Filipinas officials. Pilots must undergo examination for this voyage. Information regarding the money and goods carried on these vessels must be exchanged by the officials at Manila and Acapulco. Ships must not be overladen. No person may go from Nueva España to the islands unless he give bonds for becoming a permanent resident of them, or is sent thither as a soldier. Officials of the trading vessels may not engage in trade in any form. The fares Page 11paid by passengers thereon shall be regulated, and so adjusted that they shall pay their share toward the expenses of carrying on this commerce....