The Philippine Islands, 1493-1898 - Volume 13 of 55 1604-1605 Explorations by Early Navigators, Descriptions of the Islands and Their Peoples, Their History and Records of The Catholic Missions, As Related in Contemporaneous Books and Manuscripts, Showing the Political, Economic, Commercial and Religious Conditions of Those Islands from Their Earliest Relations with European Nations to the Close of the Nineteenth Century 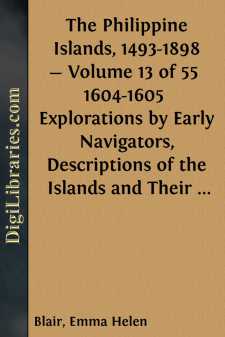 RELATION OF THE FILIPINAS ISLANDS

The men of the Society remained in the rest of those Pintados Islands, occupied as we have already seen. In various places, during those two years, there had been newly erected to the glory of Jesus Christ thirty churches; but in all this the least important thing was the material gain, for the real success was in the continual increase of the body of Christians in all those churches. In places where Ours did not reside, each church had its own representative [fiscal], who took care of it and assembled the people, at least on feast-days, to recite the prayers and chant the Christian doctrine. They did this, not only in the church, but in their houses; and even when journeying by water, or cultivating the soil, their usual recreation is to sing these exercises. In proportion at the fruit grew more abundantly, so did the need of laborers increase—until Ours, exhausted by their lack of strength to reap such copious harvests, unanimously called for the succor of new companions. But as this aid must be sent from Europe, which is so far away, and as they could not depend upon letters, it was agreed to despatch Father Francisco de Vera, as a person who had been most successful in conveying the last reënforcement, so useful and so large—which, however, was now too small for so greatly increased a harvest, and more reapers were needed. The father set out from Manila on this journey, in the month of June of the year one thousand five hundred and ninety-eight, in the ship "Santa Margarita," which, after a prosperous voyage of four months, reached Nueva España. Soon afterward, orders arrived there from our very reverend father-general, Claudio Aquaviva, that Father Diego Garcia, who had completed his term as rector of the college of Mexico, should repair at once to the Filipinas, to visit and console, on behalf of his Paternity, Ours who were there; and should take with him a reënforcement of earnest laborers in the vineyard of the Lord, which was the same object for which Father Francisco de Vera had gone. It seemed best to the superiors that the good father should remain there and obtain his much needed rest, and not undergo at once the fresh hardships of a second voyage to the Filipinas. Besides this, they desired to retain him in Mexico, because his presence in that province was important, as it had been in the Filipinas, and, still earlier, in Madrid, and in Alcala de Henares where he had been superior. So the father-visitor departed, as we shall later see, with some companions for the Filipinas.

Further transactions in Manila up to the year one thousand five hundred and ninety-eight. Chapter XXXVIII.

Although in Manila we had received novices from the very beginning, and although a goodly number of acceptable men of various ranks had entered our Society there, and had proved to be zealous servants of God and very useful in our ministries, at the time of which we are speaking their number was greater....