The Philippine Islands, 1493-1898 - Volume 12 of 55 1601-1604 Explorations by Early Navigators, Descriptions of the Islands and Their Peoples, Their History and Records of the Catholic Missions, as Related in Contemporaneous Books and Manuscripts, Showing the Political, Economic, Commercial and Religious Conditions of Those Islands from Their Earliest Relations with European Nations to the Close of the Nineteenth Century 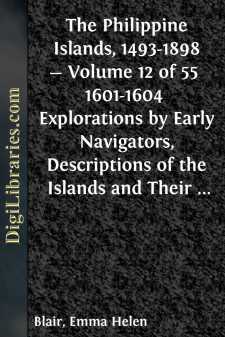 The general documents contained in this volume cover the years 1601-03; they are followed by Chirino's Relacion, which was published in 1604, but the events related therein end in 1602. The two notable occurrences in this period are the great fire, and the Chinese revolt in Manila in the year 1603—the latter ending in the slaughter or expulsion of almost all the Chinese in the islands. Pirates are still raiding the shores of the northern islands; but the available forces of the colonial government are diverted to the assistance of an expedition from India which attempts (but unsuccessfully) to drive the Dutch from the Spice Islands. Commercial difficulties still affect the prosperity of the islands, caused mainly by the unauthorized share of Mexican speculators in the profitable trade between the Philippines and China; and various expedients are proposed for the regulation of this commerce. The great fire is a heavy blow to the Spanish colony, and the people fear the vengeance of the Chinese for the slaughter of their countrymen. The new archbishop of Manila complains that the religious orders are in much need of inspection and reform; some neglect the Indians to whom they should be missionaries, others keep the infidel Chinese on their lands, and allow the Indians to be corrupted by the vices of the former. After the Chinese revolt is quelled, vigorous protests are sent to the home government, especially by the ecclesiastics, against the laxity hitherto prevailing in the enforcement of the laws restricting Chinese migration to the islands.

These documents are followed by the noted and rare work of the Jesuit Pedro Chirino, Relacion de las Islas Filipinas (Roma, 1604). It is mainly intended as a history of the missions in the islands conducted by the Jesuits, begun in 1581; Chirino himself arrived there in 1595, and gives a full and detailed account of the missions from that time until his departure in 1602. Not only this, but he narrates many things of interest and importance regarding the people, their customs and character, their language and state of civilization, their religious beliefs and worship, and the results of missionary labors and influence upon them. Much of this information is of special value as one of the earliest records regarding the Filipino peoples in their primitive condition, before they had had much contact with the white men; for the Jesuits went even beyond the outposts of Spanish civilization, among tribes who sometimes had never seen white men before. Chirino's Relacion is here presented for the first time in an English dress; and the Editors are fortunate in securing for this publication some valuable annotations from the hand of Rev. Pablo Pastells, S.J. of Barcelona, Spain, who was for some eighteen years superior of the Jesuit missions in the Philippines. Chirino's work is begun in the present volume, and will be concluded in Vol. XIII.

The presence of Van Noordt's fleet in the Oriental archipelago renders the Spaniards apprehensive that their possessions therein may be attacked, especially that of the rich Spice Islands....