The Philippine Islands, 1493-1898 - Volume 10 of 55 1597-1599 Explorations by Early Navigators, Descriptions of the Islands and Their Peoples, Their History and Records of the Catholic Missions, as Related in Contemporaneous Books and Manuscripts, Showing the Political, Economic, Commercial and Religious Conditions of Those Islands from Their Earliest Relations with European Nations to the Close of the Nineteenth Century 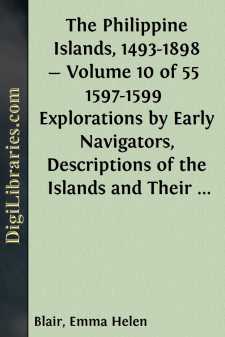 The present volume covers the years 1597–99, and is mainly occupied with the details of the Philippine colony's internal affairs and development Mindanao has been conquered, but proves to be an unprofitable possession, except that the Spanish garrison there serves as a check on the piratical Moros, who otherwise would harry the Pintados Islands. Japanese pirates have menaced Luzón, and the Chinese immigration needs frequent restriction. In the colony there is much corruption in official circles and inaction and inefficiency in the military. The new governor relates his efforts to improve the condition of the city and administer the affairs of the islands; but he is accused, especially by the ecclesiastics, of immorality and tyrannical behavior, and of general unfitness for his office. The Indians are oppressed in various ways; and some mutinies among them have been suppressed. Formal submission to the Spanish crown is required from the Indians; but this proves difficult to enforce. They need more missionaries, who are to be sent. The usual discords between the secular and ecclesiastical authorities still exist; and the relations between Manila and Mexico are none too cordial. Complaint is made of the trade recently begun with the Chinese at Canton. Page 5

A letter from Antonio de Morga (June 30, 1597) notifies the king that the treasure-ship “San Felipe” has been wrecked on the coast of Japan, and her cargo seized by the emperor of that country; this is a heavy blow to the Philippine colony. Franciscan missionaries have been crucified in Japan. Morga approves the reëstablishment of the Audiencia in the islands.

Luis Perez Dasmariñas recommends (July 20, 1597) that the royal hospital at Manila should be placed under the joint care of the Franciscans and the Order of La Misericordia. He reports that the religious are reluctant to do this, but that the confraternity approve of the plan—except that they are unwilling to assume a financial responsibility in a work which is, on their part, one of charity only.

A group of short letters from Tello to the king (April 29–August 12, 1597) relates various matters of interest. The conquest of Mindanao has been practically effected. The numbers and power of the Chinese in the islands have been greatly reduced. A rising of the Zambales has been quelled. Insubordinate Spaniards have been punished; “on New Year's day, I had the entire city council arrested for an act of disobedience to me.” Tello is improving the city, and is striving to secure a good water-supply. He has imprisoned Dasmariñas, for failure to equip the lost treasure-ship properly. The Japanese talk of seizing Formosa, but the Spaniards are planning to forestall them in this. The Chinese who slew some Spaniards en route to Mindanao have been punished with death. It is reported that the Spanish fort of Maluco has been seized by the natives. The natives of Mindanao have rebelled (August, 1597), and reënforcements have been sent thither to end the Page 6the Chinese, whom he views with some suspicion....