The Philippine Islands, 1493-1898 - Volume 09 of 55 1593-1597 Explorations by Early Navigators, Descriptions of the Islands and Their Peoples, Their History and Records of the Catholic Missions, as Related in Contemporaneous Books and Manuscripts, Showing the Political, Economic, Commercial and Religious Conditions of Those Islands from Their Earliest Relations with European Nations to the Close of the Nineteenth Century 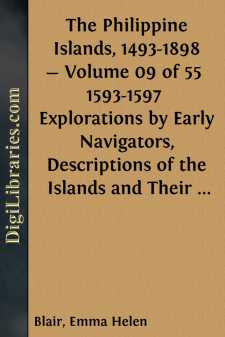 The events related in the present volume (1593–97) conclude the first quarter-century of the history of Manila as a Spanish settlement. That city, although small, is gaining in importance and prosperity; it is fairly well fortified, and its public institutions are increasing; it is now the seat of an archbishop, and three dioceses are formed to be under his care. Restless spirits among the Spaniards desire to conquer neighboring lands; this is partially accomplished in Mindanao, but that island proves to be of little value. An expedition is sent nominally in aid of Camboja against Siam, but is unsuccessful. Meanwhile, the Spaniards are not free from danger: the emperor of Japan is apparently plotting their subjection; and the natives of the islands, although nominally pacified, are inclined to rebel. The increasing numbers of the Chinese in the islands render them dangerous, and various restrictions are imposed upon them. Governor Dasmariñas, slain by his Chinese oarsmen, is succeeded pro tempore by his son Luis Pérez; but the latter is too young for so important a post, and the king reestablishes the Audiencia at Manila. Its president, Francisco Tello, is also governor of the islands.

In 1593 another ambassador arrives at Manila from the Japanese ruler Hideyoshi. This is Faranda, Page 6who furnishes a full account of the manner in which Fray Juan Cobos had been received in Japan the year before, and of his own appointment from the emperor as envoy to the Spaniards, on which errand he departed with Cobos. The latter perished by shipwreck, Faranda arriving safely at Manila. He professes a desire for peace and friendship between the Japanese and Spaniards, instead of the subjection of the latter; and asks that Franciscan missionaries be sent to his country. Since he brings no credentials, except letters from Fray Cobos, the governor orders an official inquiry into the whole matter, and examines witnesses about it. Juan de Solis, a Spanish captain who happened to be in Japan when Fray Cobos arrived there, thinks that the emperor is sincere in asking only the friendship of the Castilians. Solis relates the events of the father's stay there, confirming the account given by Faranda. A similar deposition is made by Antonio Lopez, the Chinese convert who comes with Faranda. But there follows a long account, apparently obtained from conversations held with this Antonio and several others, of intrigues and plots among the Japanese to subdue the Philippines, as they have done with Corea. The Spaniards are warned against the Chinese who are in Manila. Much of this is apparently the gossip of the Parián; but it affords curious side-lights on the relations between the Japanese, Chinese, and Spaniards. A letter from Dasmariñas to the Japanese emperor (May 20, 1593) announces his despatch of another envoy, the Franciscan priest Pedro Baptista.

Governor Dasmariñas writes (June 20, 1593) to King Felipe, reporting the present state of affairs in he islands....