The Philippine Islands, 1493-1898 - Volume 08 of 55 1591-1593 Explorations by Early Navigators, Descriptions of the Islands and Their Peoples, Their History and Records of the Catholic Missions, as Related in Contemporaneous Books and Manuscripts, Showing the Political, Economic, Commercial and Religious Conditions of Those Islands from Their Earliest Relations with European Nations to the Close of the Nineteenth Century 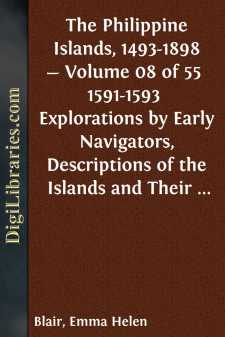 In this volume are recorded the more important events in the history of the Philippine colony during the years 1591–92. The dissensions between the secular and the ecclesiastical authorities continue, though the governor asks, in various important public affairs, the advice of the religious orders, and in view of a threatened invasion by the Japanese, appeals to the ecclesiastics to cease their opposition to his measures, and aid his efforts to save the colony. Dasmariñas does all in his power for its defense and increase; but the unfriendly attitude of the ecclesiastics, the restrictions laid on commerce, the poverty of the public treasury, and the greed of officials and other influential residents, all greatly hinder and embarrass his efforts. A papal decree orders the Indian slaves in the islands to be freed. Explorations are made in northern Luzón, opening up a rich and important region; and the conquest of Mindanao is undertaken. The Chinese trade continues to call for special measures: the Spanish residents of the islands ask for permission from the home government to trade with the Portuguese colony of Macao; and, in order to encourage the Indians to keep up their native industries, they are forbidden to wear Chinese stuffs. A revolt of the Zambales and Negritos of Page 5western Luzón is quelled, and the surviving insurgents are dispersed or enslaved. The emperor of Japan demands from the Spaniards of the islands tribute and homage, which excites in their minds apprehensions of coming war.

The document of 1591 relating to the collection of tributes in the islands, begun in Vol. VII, is here concluded. The bishop asks the governor to let him know his decision regarding such collection; the latter replies (February 8) that he cannot make any change in present conditions without further orders from the king; and issues (February 28) a decree regulating the collection of tributes. A dispute between the bishop and the governor ensues, followed by letters (dated March 4–21) interchanged by them, which are an interesting revelation of the relations between the religious and secular authorities, and of the conflicting interests involved therein. The governor repels (March 8) the accusation that he has been the mouthpiece of others; defends the Jesuits from any suspicion of unfriendliness toward the bishop; and complains that he is still attacked in the pulpit. In another letter (dated March 19) Dasmariñas makes suggestions to the bishop regarding the best means of meeting the religious needs of the Indians with the small number of priests who can be thus employed. He denies that he has any partiality for the Augustinians over the other orders and makes various explanations regarding his attitude toward the orders. He then urges the bishop to follow his suggestions, and thus to fulfil his obvious and pressing duties—advising Salazar not to meddle with the encomenderos, and other matters which do not concern his office. Dasmariñas also complains Page 6that the bishop does not provide laymen to instruct the natives; that he allows the Indians to come to Manila too often with their complaints, and that there are irregularities in the appointment of clergymen to benefices....