The Philippine Islands, 1493-1898 - Volume 06 of 55 1583-1588 Explorations by Early Navigators, Descriptions of the Islands and Their Peoples, Their History and Records of the Catholic Missions, as Related in Contemporaneous Books and Manuscripts, Showing the Political, Economic, Commercial and Religious Conditions of Those Islands from Their Earliest Relations with European Nations to the Close of the Nineteenth Century 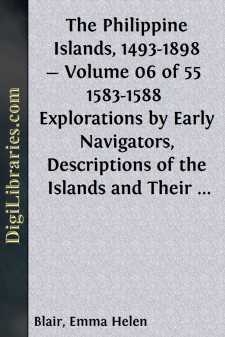 The present volume covers the period of 1583 to 1588 inclusive. At the close of two decades of Spanish occupation in the Philippines, the native population is decimated, and the Spanish colonists are poor, heavily burdened with taxation, and largely non-producing. The islands are but nominally defended by a small, irregular, demoralized force of unpaid soldiers, whose lawlessness and arrogance render them dangerous to their own countrymen, and tyrants over the helpless natives. The Audiencia is a costly institution, a burden of which all the people complain. They have other grievances and many needs, which finally impel them to send a special envoy to Spain, to procure relief and aid from the home government. The documents in this volume contain much valuable information regarding the economic condition of the colony, and its commercial relations with China and Mexico respectively. As the Spanish settlers in the Philippines find that they are largely dependent upon China for their food, those who are wise see the necessity of encouraging and extending agriculture in the islands; but others are fired with the lust for wealth and conquest, and urge upon Felipe II a scheme for subduing China by force of arms, thus to give Spain the control of the great Oriental world, and incidentally to enrich a host of needy Spanish subjects.

In Volume V was presented the greater part of the royal decree establishing the Audiencia of the Filipinas; the document is here concluded. The duties of certain subordinate officials of that tribunal—commissioners of examination, jail-wardens, and interpreters—are carefully prescribed. Such commissioners are forbidden to play games of chance, except for articles of food ready to be eaten. Prisoners in jail shall not be allowed to gamble, except for food. The document closes with a general provision for a tariff of official fees, and for the care of the Audiencia's archives.

Felipe II decrees (June 21, 1583) that the Audiencia aid the Franciscan missionaries in the islands; and (April 24, 1584) that the religious orders there continue to receive from the royal treasury the gratuities originally bestowed upon them by Legazpi. The officials of the treasury furnish a statement of their accounts, which shows a yearly deficit in current expenses; and extraordinary expenses besides, which nearly equal the total revenue for the year. Alarmed at this condition of affairs, the Audiencia institutes an inquiry (June 15, 1584) into the commercial and industrial status of the colony; the witnesses all testify that great scarcity of supplies, and poverty among the people, are prevalent; that a considerable portion of the native population has perished; and that the non-productive elements of the population are much too large.

One of the auditors, Melchor Davalos, writes (July 3, 1584) to the king a letter which, withal containing some valuable information regarding matters in the islands, is a curious mixture of pedantry, bigotry, egotism, and vanity....