The Philippine Islands, 1493-1898 Explorations by early navigators, descriptions of the islands and their peoples, their history and records of the catholic missions, as related in contemporaneous books and manuscripts, showing the political, economic, commercial and religious conditions of those islands from their earliest relations with European nations to the close of the nineteenth century, Volume XXVI, 1636 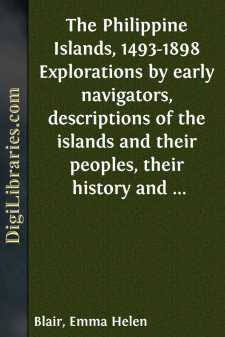 The scope of the present volume is confined to the year 1636, but enough of interest occurs within that time—thanks to the overflowing energy of the new governor, Corcuera, who promptly reorganizes all departments of the government; his controversies with the archbishop and the friars; and the difficulties and dissensions which affect the orders themselves. The greater part of this volume is occupied by Corcuera’s report for the first year of his governorship.

The nuns of St. Clare ask (probably in 1635) for certain favors from the royal treasury; and their agent avails himself of this opportunity to ask favors for his own order, the Franciscan Recollects. The nuns themselves write to the king (June 30, 1636), through their abbess, Ana de Christo, informing him of their progress and growth in the Philippines, and other matters. They have founded a convent of their order at Macao; and have built a house at Manila for their residence. They complain that Governor Corcuera has driven the Franciscans from the administration of the royal hospital, and coerced the archbishop—the story of whose ill-treatment by the governor they briefly repeat, asking the king to grant the prelate redress therefor. They also ask that their confessor may have a cell at the hospital, which is near them; and complain that their convent is much injured by the walls and buildings that are being erected about it—some of these arbitrarily ordered by the governor, who ignores the needs and comfort of the nuns. They close with another appeal for royal aid to finish the building of their convent, and thanks for the king’s effort to secure the canonization of their foundress.

A relation for the year 1635–36 describes the arrival at Manila of Governor Corcuera, and narrates his controversies with the archbishop. The account is more detailed and circumstantial than that of Diaz (given in Vol. XXV); and the two constitute an interesting chapter, not only of ecclesiastical history but of human nature. The friars finally send secret envoys to the king, to inform him of their troubles. News comes from Japon of renewed persecutions of Christians there, and of the apostasy of the Jesuit provincial for that kingdom—who has even, it is said, married a heathen woman. At the end of this document is added a copy of a pasquinade which appeared at that time in Manila, lampooning the governor and his adherents.

A group of letters from Corcuera (June 30, 1636) constitute his first annual report to the home government.

Ecclesiastical affairs engross a large part of this document, as would be expected from the recent occurrence of Corcuera’s controversy with the archbishop. The governor’s account of this affair will be found especially interesting when compared with those presented, in Vol. XXV, from Jesuit and Recollect sources. We have given more space to this episode than usual—partly because this contention between the civil and ecclesiastical authorities is, although but one of many, a typical and important one; and partly because it affords a favorable opportunity to view such an episode from the different standpoints of that time in Manila—a necessary mental process for obtaining a correct knowledge, not only of this affair, but of all others in which the like elements of human nature are concerned....