The Philippine Islands, 1493-1803 - Volume 05 of 55 1582-1583 Explorations by Early Navigators, Descriptions of the Islands and Their Peoples, Their History and Records of the Catholic Missions, as Related in Contemporaneous Books and Manuscripts, Showing the Political, Economic, Commercial and Religious Conditions of Those Islands from Their Earliest Relations with European Nations to the Beginning of the Nineteenth Century 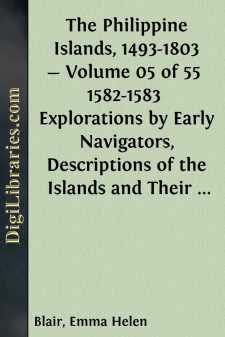 Letter from Peñalosa to Felipe II

There has now returned one of the ships by which I wrote in the year 80. Until now no word has been received of the other ship to Nueva España, in which I sent a duplicate report. Therefore in this letter I shall refer to some of the most essential points which I had written, and will give a report also of what is presented for the first time.

This country is advancing rapidly in the conversion of the natives, and they are quick to embrace baptism and the knowledge of our holy faith. If the harvest is not greater, it is for lack of workers. However, the repartimientos held by the Spaniards contain but few persons and yield small income; and thus they cannot assist in supplying all the instruction necessary, because of the cost of maintaining the religious. In this ship sail two religious of the order of St. Augustine, in order to beseech your Majesty to grant them grace in several necessary points. One is father Fray Juan Pimentel, in whom are found many excellent qualities. Among the things that they desire, I consider it very important that your Majesty order convents to be built in all the villages and cities. There should be a convent of six [17] religious in each of the villages, and one of twelve in the cities. May your Majesty see to it that these be provided, from the alms which are customarily given to those who serve in the instruction of your Majesty’s towns. It is very inconvenient that for lack of the means of support, the priests who are sent here and are occupied in instructing the Indians, are not able to carry on their work. If there were convents, none but the most approved persons would be sent to occupy them, as is necessary for the result that they strive to attain by their doctrine, lives, and examples.

It is very necessary that the friars who are sent to these islands come directly from España, and that they have not remained any length of time in Nueva España. As that land is so prosperous and wealthy, and the affairs and teaching of the Indians have attained such progress, they become much discouraged in this country, and try to return to New Spain or go elsewhere.

As a result of this feeling, there set out in April of this year the custodian of the order of St. Francis, with seven other friars of this city. They sailed without my approbation in a fragata which had been secretly made ready; and went to Macau, a town in China which is inhabited by Portuguese. The ships from India belonging to Portugal stop there for trade, as well as those going to Japan. It seemed to me that God would not sanction their departure, nor would your Majesty be pleased to have them leave this country, where there are so many native Christians and where religious are so needed, since they had been sent hither at your Majesty’s expense, to discharge the obligations of the royal conscience; but [18] without my order, and at such a time, they set out. We even yet do not know the attitude taken by your Majesty in regard to the affairs of Portugal....