The Philippine Islands, 1493-1803 - Volume 04 of 55 1576-1582 Explorations by Early Navigators, Descriptions of the Islands and Their Peoples, Their History and Records of the Catholic Missions, as Related in Contemporaneous Books and Manuscripts, Showing the Political, Economic, Commercial and Religious Conditions of Those Islands from Their Earliest Relations with European Nations to the Beginning of the Nineteenth Century 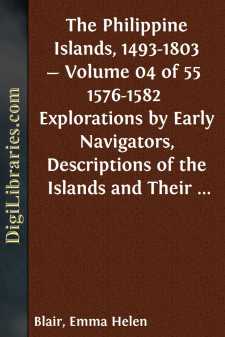 The first official report sent by Governor Francisco de Sande to the home government is dated June 7, 1576. It is introduced by a description of the winds prevalent in the Indian Archipelago. Arriving at Manila (August 25, 1575), he finds that much of the city has been destroyed by a Chinese pirate named Limahon; and he relates, in a graphic manner, the circumstances of this affair. In the first attack (September, 1574), fourteen Spaniards and more than eighty Chinese are slain. The enemy renew the attack a few days later, but are repulsed with much loss. The Moros of the vicinity rebel, insulting and robbing the friars and defiling the churches. The Chinese proceed to Pangasinan, where they erect a fort, determining to establish themselves there. All the Spanish forces are assembled, and an expedition is sent (March 23, 1575), under Juan de Salcedo, to attack the marauders. In the first encounter the Spanish are victorious; but through mismanagement they fail to follow up their success, and finally the Chinese depart from Luzón. A Chinese officer named Omocon comes to search for the pirate Limahon; on his return, he carries some Augustinian friars to China, but they return in a few months. The Chinese bring certain presents to the governor, which he turns over to the king. He does not like that people, saying that they are mean, impudent, importunate, and deceitful. He relates many interesting particulars regarding the country and people of China—derived from the various reports which have come to him from traders, missionaries, and the Filipino natives.

Sande has a poor opinion of the trade with China; the only useful article which the Chinese bring to the Philippines is iron. He urges here, as in the letter preceding this report, that the king should at once send an expedition for the conquest of China, for which four thousand to six thousand men would be needed. He argues that this enterprise would be an act of justice, for several curious reasons: it would free the wretched Chinese from the oppressive tyranny and cruelty of their rulers; it is right to punish them for their many crimes and vices; and they ought to be compelled to admit foreigners to their country. The governor is not troubled by any scruples of conscience respecting the Line of Demarcation; for he affirms that all the region from the Moluccas to the islands of Japan, inclusive, with Borneo and all the coast of China, is "within the demarcation of Spain." He is ready to drive the Portuguese out of the Moluccas, if the king will consent thereto.

Sande gives further details as to the Philippines and their people. The climate is healthful, for those who live temperately. The culture of rice is described, and the fertility of the soil praised. Much interesting information is given regarding the characteristics, habits, and customs of the people; he regards most of them as drunken, licentious, and idle, and avaricious and murderous. The governor has rebuilt the ruined fort at Cebu; but he thinks that a settlement there is useless and expensive....