The Philippine Islands, 1493-1803 - Volume 02 of 55 1521-1569 Explorations by Early Navigators, Descriptions of the Islands and Their Peoples, Their History and Records of the Catholic Missions, as Related in Contemporaneous Books and Manuscripts, Showing the Political, Economic, Commercial and Religious Conditions of Those Islands from Their Earliest Relations with European Nations to the Beginning of the Nineteenth Century 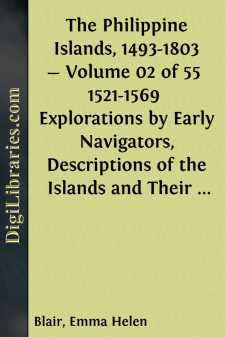 [These documents are all contained in Navarrete's Col. de viages, tomo v, being part of the appendix of that volume (pp. 193-439). They are here summarized in even briefer form than were the documents concerning the voyage of Magalhães, indicating sources rather than attempting a full presentation of the subject. Navarrete precedes these documents with an account of Loaisa's voyage covering one hundred and ninety pages—compiled, as was his account of Magalhães, from early authors and the documents in the appendix.]

A memorandum without date or signature [2] describes to the king the advantages that would arise from establishing the India House of Trade at Corunna rather than at Seville: the harbor of Corunna is more commodious; it is nearer the resorts of trade for the northern nations; much trade now going to Portugal will come to Corunna; larger ships can be used and better cargoes carried; it is nearer to sources of supply, and expeditions can be fitted out better from this place; and it will be impossible for the captains or others to take forbidden merchandise, or to land articles on the return voyage—as they could do at Seville, because of having to navigate on the river. (No. i, pp. 193-195.)

1522. The king and queen, after the return of the "Victoria" issue a document with thirty-three concessions to natives of their kingdom who should advance sums of money, etc., for fitting out expeditions for the spice regions; these privileges are to cover the first five expeditions fitting out. The interests and rights of the sovereigns and of the contributors are clearly defined. These fleets are to trade in the Moluccas, or in any other lands and islands discovered within Castile's demarcation. The House of Trade for the spice regions is to be established at Corunna. (No. ii, pp. 196-207.)

Madrid, April 5, 1525. Fray GarcГѓ­a Jofre de Loaisa, a commander of the order of St. John, [3] is appointed captain-general of the fleet now fitting out at Corunna for the Moluccas, and governor of those islands. His powers are outlined, being such as were usually given in such expeditions. As annual salary he is to have, during the voyage, "two thousand nine hundred and twenty ducats, which amount to one million, ninety-four thousand five hundred maravedis." He is to have certain privileges of trade, being allowed to carry merchandise. Rodrigo de Acuña is appointed captain of the fourth ship, with a salary of three hundred and seventy-five thousand maravedГѓ­s. He may invest fifty thousand maravedГѓ­s in the fleet, such sum being advanced from his salary. The accountant for the fleet, Diego Ortiz de Orue, is instructed to fulfil the duties incident to his office (these are named), and to keep full accounts. Instructions are issued also to the treasurer, Hernando de Bustamante, who is ordered "to obey our captain and the captain of your ship, and try to act in harmony with our officials, and shun all manner of controversy and discord." He must discuss with the captains and officials questions pertaining to his duty, for the better fulfilment thereof....