The Philippine Islands, 1493-1803 - Volume 01 of 55 1493-1529 Explorations by Early Navigators, Descriptions of the Islands and Their Peoples, Their History and Records of the Catholic Missions, as Related in Contemporaneous Books and Manuscripts, Showing the Political, Economic, Commercial and Religious Conditions of Those Islands from Their Earliest Relations with European Nations to the Beginning of the Nineteenth Century 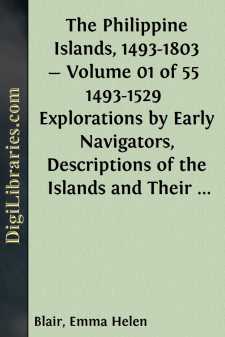 The American people are confronted with two race problems, one within their own confines and long familiar but still baffling solution; the other, new, remote, unknown, and even more imperatively demanding intelligent and unremitting effort for its mastery.

In the first case there are some eight millions of people ultimately derived from various savage tribes in Africa but long since acclimatized, disciplined to labor, raised to civilized life, Christianized, and by the acquisition of the English language brought within a world of ideas inaccessible to their ancestors. Emancipated by the fortune of war they are now living intermingled with a ruling race, in it, but not of it, in an unsettled social status, oppressed by the stigma of color and harassed and fettered by race prejudice.

In the other case there are six or seven millions of Malays whose ancestors were raised from barbarism, taught the forms and manners of civilized life, Christianized, and trained to labor by Catholic missionaries three centuries ago. A common religion and a common government have effaced in large measure earlier tribal differences and constituted them a people; yet in the fullest sense of the word a peculiar people. They stand unique as the only large mass of Asiatics converted to Christianity in modern times. They have not, like the African, been brought within the Christian pale by being torn from their natural environment and schooled through slavery; but, in their own home and protected from general contact with Europeans until recent times, they have been moulded through the patient teaching, parental discipline, and self-sacrificing devotion of the missionaries into a whole unlike any similar body elsewhere in the world. They, too, by the fortunes of war have lost their old rulers and guides and against their will submit their future to alien hands. To govern them or to train them to govern themselves are tasks almost equally perplexing, nor is the problem made easier or clearer by the clash of contradictory estimates of their culture and capacity which form the ammunition of party warfare.

What is needed is as thorough and intelligent a knowledge of their political and social evolution as a people as can be gained from a study of their history. In the case of the Negro problem the historical sources are abundant and accessible and the slavery question is accorded, preeminent attention in the study of American history. In the Philippine question, however, although the sources are no less abundant and instructive they are and have been highly inaccessible owing, on the one hand, to the absolute rarity of the publications containing them, and, on the other, to their being in a language hitherto comparatively little studied in the United States. To collect these sources, scattered and inaccessible as they are, to reproduce them and interpret them in the English language, and to make it possible for university and public libraries and the leaders in thought and policy to have at hand the complete and authentic records of the culture and life of the millions in the Far East whom we must understand in order to do them justice, is an enterprise large in its possibilities for the public good....