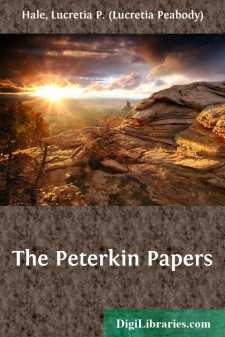 THE LADY WHO PUT SALT IN HER COFFEE.

his was Mrs. Peterkin. It was a mistake. She had poured out a delicious cup of coffee, and, just as she was helping herself to cream, she found she had put in salt instead of sugar! It tasted bad. What should she do? Of course she couldn't drink the coffee; so she called in the family, for she was sitting at a late breakfast all alone. The family came in; they all tasted, and looked, and wondered what should be done, and all sat down to think.

At last Agamemnon, who had been to college, said, "Why don't we go over and ask the advice of the chemist?" (For the chemist lived over the way, and was a very wise man.)

Now the chemist was just trying to find out something which should turn everything it touched into gold; and he had a large glass bottle into which he put all kinds of gold and silver, and many other valuable things, and melted them all up over the fire, till he had almost found what he wanted. He could turn things into almost gold. But just now he had used up all the gold that he had round the house, and gold was high. He had used up his wife's gold thimble and his great-grandfather's gold-bowed spectacles; and he had melted up the gold head of his great-great-grandfather's cane; and, just as the Peterkin family came in, he was down on his knees before his wife, asking her to let him have her wedding-ring to melt up with all the rest, because this time he knew he should succeed, and should be able to turn everything into gold; and then she could have a new wedding-ring of diamonds, all set in emeralds and rubies and topazes, and all the furniture could be turned into the finest of gold.

Now his wife was just consenting when the Peterkin family burst in. You can imagine how mad the chemist was! He came near throwing his crucible—that was the name of his melting-pot—at their heads. But he didn't. He listened as calmly as he could to the story of how Mrs. Peterkin had put salt in her coffee.

At first he said he couldn't do anything about it; but when Agamemnon said they would pay in gold if he would only go, he packed up his bottles in a leather case, and went back with them all.

First he looked at the coffee, and then stirred it. Then he put in a little chlorate of potassium, and the family tried it all round; but it tasted no better. Then he stirred in a little bichlorate of magnesia. But Mrs. Peterkin didn't like that. Then he added some tartaric acid and some hypersulphate of lime. But no; it was no better. "I have it!" exclaimed the chemist,—"a little ammonia is just the thing!" No, it wasn't the thing at all.

Then he tried, each in turn, some oxalic, cyanic, acetic, phosphoric, chloric, hyperchloric, sulphuric, boracic, silicic, nitric, formic, nitrous nitric, and carbonic acids. Mrs. Peterkin tasted each, and said the flavor was pleasant, but not precisely that of coffee. So then he tried a little calcium, aluminum, barium, and strontium, a little clear bitumen, and a half of a third of a sixteenth of a grain of arsenic. This gave rather a pretty color; but still Mrs. Peterkin ungratefully said it tasted of anything but coffee. The chemist was not discouraged. He put in a little belladonna and atropine, some granulated hydrogen, some potash, and a very little antimony, finishing off with a little pure carbon. But still Mrs. Peterkin was not satisfied.

The chemist said that all he had done ought to have taken out the salt. The theory remained the same, although the experiment had failed....