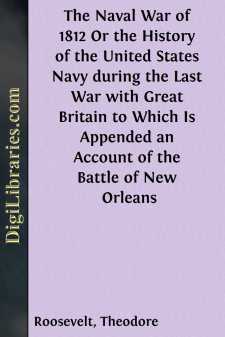 The history of the naval events of the War of 1812 has been repeatedly presented both to the American and the English reader. Historical writers have treated it either in connection with a general account of the contest on land and sea, or as forming a part of the complete record of the navies of the two nations. A few monographs, which confine themselves strictly to the naval occurrences, have also appeared. But none of these works can be regarded as giving a satisfactorily full or impartial account of the war—some of them being of he "popular" and loosely-constructed order, while others treat it from a purely partisan standpoint. No single book can be quoted which would be accepted by the modern reader as doing justice to both sides, or, indeed, as telling the whole story. Any one specially interested in the subject must read all; and then it will seem almost a hopeless task to reconcile the many and widely contradictory statements he will meet with.

There appear to be three works which, taken in combination, give the best satisfaction on the subject. First, in James' "Naval History of Great Britain" (which supplies both the material and the opinions of almost every subsequent English or Canadian historian) can be found the British view of the case. It is an invaluable work, written with fulness and care; on the other hand it is also a piece of special pleading by a bitter and not over-scrupulous partisan. This, in the second place, can be partially supplemented by Fenimore Cooper's "Naval History of the United States." The latter gives the American view of the cruises and battles; but it is much less of an authority than James', both because it is written without great regard for exactness, and because all figures for the American side need to be supplied from Lieutenant (now Admiral) George E. Emmons' statistical "History of the United States Navy," which is the third of the works in question.

But even after comparing these three authors, many contradictions remain unexplained, and the truth can only be reached in such cases by a careful examination of the navy "Records," the London "Naval Chronicle," "Niles' Register," and other similar documentary publications. Almost the only good criticisms on the actions are those incidentally given in standard works on other subjects, such as Lord Howard Douglass' "Naval Gunnery," and Admiral Jurien de la Gravière's "Guerres Maritimes." Much of the material in our Navy Department has never been touched at all. In short, no full, accurate, and unprejudiced history of the war has ever been written.

The subject merits a closer scrutiny than it has received. At present people are beginning to realize that it is folly for the great English-speaking Republic to rely for defence upon a navy composed partly of antiquated hulks, and partly of new vessels rather more worthless than the old. It is worth while to study with some care that period of our history during which our navy stood at the highest pitch of its fame; and to learn any thing from the past it is necessary to know, as near as may be, the exact truth....