The Mystic Will A Method of Developing and Strengthening the Faculties of the Mind, through the Awakened Will, by a Simple, Scientific Process Possible to Any Person of Ordinary Intelligence 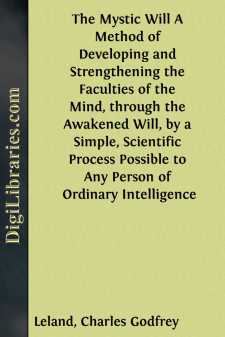 "Unto many Fortune comes while sleeping."—Latin Proverb.

"Few know what is really going on in the world."—American Proverb.

It is but a few years since it suddenly struck the gay world of comic dramatists and other literary wits, that the Nineteenth Century was drawing to an end, and regarding it as an event they began to make merry over it, at first in Paris, and then in London and New York, as the fin-de-siècle. Unto them it was the going-out of old fashions in small things, such as changes in dress, the growth of wealth, or "the mighty bicycle," with a very prevalent idea that things "are getting mixed" or "checquered," or the old conditions of life becoming strangely confused. And then men of more thought or intelligence, looking more deeply into it, began to consider that the phrase did in very truth express far more serious facts. As in an old Norman tale, he who had entered as a jester or minstrel in comic garb, laid aside his disguise, and appeared as a wise counsellor or brave champion who had come to free the imprisoned emperor.

For it began to be seen that this fin-de-siècle was developing with startling rapidity changes of stupendous magnitude, which would ere long be seen "careering with thunder speed along," and that all the revolutions and reforms recorded in history were only feeble or partial, scattered or small, compared to the world-wide unification of human interests, led by new lights, which has begun to manifest itself in every civilized country. That well nigh every person or real culture, or education guided by pure science, has within a very few years advanced to a condition of liberal faith which would have been in my university days generally reprobated as "infidelity," is not to be denied, and the fact means, beyond all question, that according to its present rate of advance, in a very few years more, this reform will end in the annulling of innumerable traditions, forms of faith and methods. Upharsin is writ on the wall.

More than this, is it not clear that Art and Romance, Poetry and Literature, as hitherto understood or felt, are either to utterly vanish before the stupendous advances of science, or what is perhaps more probable, will, coalescing with it, take new forms, based on a general familiarity with all the old schools or types? A few years ago it seemed, as regarded all æsthetic creation, that man had exhausted the old models, and knew not where to look for new. Now the aim of Art is to interest or please, by gratifying the sense or taste for the beautiful or human genius in making; also to instruct and refine; and it is evident that Science is going to fulfill all these conditions on such a grand scale in so many new ways, that, when man shall be once engaged in them, all that once gratified him in the past will seem as childish things, to be put away before pursuits more worthy of manly dignity. If Art in all forms has of late been quiet, it has been because it has drawn back like the tiger in order to make the greater bound.

One of the causes why some are laying aside all old spiritualism, romance and sentiment, is that their realisation takes up too much time, and Science, which is the soul of business, seeks in all things brevity and directness....