The Mysteries of All Nations Rise and Progress of Superstition, Laws Against and Trials of Witches, Ancient and Modern Delusions Together With Strange Customs, Fables, and Tales 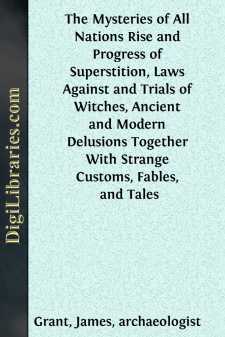 Superstition has prevailed in every generation and country in the world. There are people who think that even Adam and Eve were tainted with this hateful delusion, and that their offspring of the second generation entertained opinions opposed to true religion. That man, soon after the Creation, became acquainted with and yielded to the doctrine of devils, scarcely admits of doubt. Those who conversed with our first parents must have learned from them the circumstances connected with the temptation, fall, and expulsion from the Garden of Eden. It is not unreasonable, then, to suppose that the serpent was looked upon at an early period as something more than an ordinary earthly reptile. One can imagine Adam and Eve, when wandering in perplexity and fear, after their first great sin, starting at the sight of a serpent,—not being certain whether they beheld a reptile of flesh merely, or looked upon their old enemy that had betrayed them in their days of innocency. If they looked with suspicion on the serpent, it is natural to suppose that their children would learn to view this creeping animal as a creature endowed with supernatural powers, by which it could bring about evil, and perhaps good.

Cain, there is reason to conclude, departed from the true worship of the Most High before his offering was refused, and ere he dipped his hands in his brother's blood. In Genesis iv. 26 there is an implication that man had forsaken the right and holy religion prior to the days of Seth. There is an opinion that men soon began to worship the sun, moon, and stars, and that subsequently they paid homage to objects which contributed to their preservation and to things that might do them injury. The wandering Jew, Benjamin, one of the greatest travellers in the East, gives an interesting account of solar worship in early times. The posterity of Cush, he tells us, were addicted to the contemplation of the stars, and worshipped the sun as a god. Their towns were filled with altars dedicated to this orb. At early morn the people rose, and ran out of the cities to await the rising sun, to which on every altar there was a consecrated image, not in the likeness of a man, but after the fashion of the solar orb, formed by magic art. These artificial orbs, as soon as the sun rose, took fire, and resounded with a great noise, to the joy of the deluded devotees.

Many Jewish doctors have condescended upon the precise time when man began to commit idolatry, and they name Enos as the first star-worshipper. Arabian divines tell a story of Abraham being brought up in a dark cave, and at his first coming forth he was so much struck with the appearance of the sun, moon, and stars, that he worshipped them; and there are people who imagine that in the Book of Job they discover evidence of the heavenly host being adored in the time of the old patriarch of Uz.

Some suppose that all the gods of antiquity were Egyptian kings, others that they were Thessalian princes, others that they were Jewish patriarchs; while not a few are of opinion that they were kings of the several countries where they were worshipped. It has been supposed that Saturn represented Adam; Rhea, Eve; Jupiter, Cain; Prometheus, Abel; Apollo, Lamech; Mercury, Jabal; Bacchus, Noah; and Phaeton, Elias. Others imagine that Saturn came in place of Noah; Pluto, of Sem; Neptune, of Japheth; Bacchus, of Nimrod; and Apollo, of Phut. A third class of thinkers maintain that all the heathen gods centre in Moses, and the goddesses in Zipporah his wife, or in Miriam his sister. A fourth class hold that Saturn was Abraham; Rhea, Sarah; Ceres, Keturah; Pallas, Hagar; Jupiter, Isaac; Juno, Rebecca; Pluto, Ishmael; Typhon, Jacob; and Venus, Rachel. Such are examples of imaginary resemblances between real and fictitious persons or gods that never had any existence except in the minds of fanatical romancers and a deluded people, whose faith was kept alive by deception and artifice.

It was an early belief that ether, air, land, and water were full of living spirits; and people believed, soon after man was created, that the souls of just men, subsequent to death, had part of the universe committed to them....