The Memories of Fifty Years Containing Brief Biographical Notices of Distinguished Americans, and Anecdotes of Remarkable Men; Interspersed with Scenes and Incidents Occurring during a Long Life of Observation Chiefly Spent in the Southwest 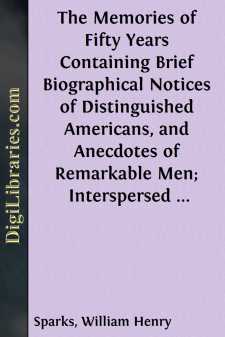 My earliest memories are connected with the first settlement of Middle Georgia, where I was born. My grandparents on the mother's side, were natives of North Carolina; and, I believe, of Anson county. My grandfather, Colonel David Love, was an active partisan officer in the service of the Continental Congress. He died before I was born; but my grandmother lived until I was seventeen years of age. As her oldest grandchild, I spent much of my time, in early boyhood, at her home near the head of Shoulderbone Creek in the county of Green. She was a little, fussy, Irish woman, a Presbyterian in religion, and a very strict observer of all the duties imposed upon her sect, especially in keeping holy the Sabbath day. All her children were grown up, married, and, in the language of the time, "gone away." She was in truth a lone woman, busying herself in household and farming affairs. With a few negroes, and a miserably poor piece of land, she struggled in her widowhood with fortune, and contrived, with North Carolina frugality and industry, not only to make a decent living, but to lay up something for a rainy day, as she phrases it. In her visits to her fields and garden, I ran by her side and listened to stories of Tory atrocities and Whig suffering in North Carolina during the Revolution. The infamous Governor Dunmore, the cruel Colonel Tarleton, and the murderous and thieving Bill Cunningham and Colonel Fannin, both Tories, and the latter natives to the soil, were presented graphically to me in their most hateful forms. In truth, before I had attained my seventh year, I was familiar with the history of the partisan warfare waged between Whig and Tory in North and South Carolina, from 1776 to 1782, from this good but garrulous old lady. I am not so certain she was good: she had a temper of her own, and a will and a way of her own; and was good-natured only when permitted this way without opposition, or cross. Perhaps I retain a more vivid memory of these peculiar traits than of any others characterizing her. She permitted no contradiction, and exacted implicit obedience, and this was well understood by everything about her. She was strict and exacting, and had learned from Solomon that to "spare the rod was to spoil the child." She read the Bible only; and it was the only book in the house. This Bible is still in existence; it was brought by my grandfather from Europe, and is now covered with the skin of a fish which he harpooned on his return voyage, appropriating the skin to this purpose in 1750. She had use for no other book, not even for an almanac, for at any moment she could tell the day of the month, the phase of the moon and the day General Washington captured Cornwallis; as also the day on which Washington died....