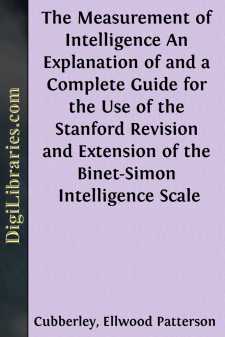 The present volume appeals to the editor of this series as one of the most significant books, viewed from the standpoint of the future of our educational theory and practice, that has been issued in years. Not only does the volume set forth, in language so simple that the layman can easily understand, the large importance for public education of a careful measurement of the intelligence of children, but it also describes the tests which are to be given and the entire procedure of giving them. In a clear and easy style the author sets forth scientific facts of far-reaching educational importance, facts which it has cost him, his students, and many other scientific workers, years of painstaking labor to accumulate.

Only very recently, practically only within the past half-dozen years, have scientific workers begun to appreciate fully the importance of intelligence tests as a guide to educational procedure, and up to the present we have been able to make but little use of such tests in our schools. The conception in itself has been new, and the testing procedure has been more or less unrefined and technical. The following somewhat popular presentation of the idea and of the methods involved, itself based on a scientific monograph which the author is publishing elsewhere, serves for the first time to set forth in simple language the technical details of giving such intelligence tests.

The educational significance of the results to be obtained from careful measurements of the intelligence of children can hardly be overestimated. Questions relating to the choice of studies, vocational guidance, schoolroom procedure, the grading of pupils, promotional schemes, the study of the retardation of children in the schools, juvenile delinquency, and the proper handling of subnormals on the one hand and gifted children on the other,—all alike acquire new meaning and significance when viewed in the light of the measurement of intelligence as outlined in this volume. As a guide to the interpretation of the results of other forms of investigation relating to the work, progress, and needs of children, intelligence tests form a very valuable aid. More than all other forms of data combined, such tests give the necessary information from which a pupil’s possibilities of future mental growth can be foretold, and upon which his further education can be most profitably directed.

The publication of this revision and extension of the original Binet-Simon scale for measuring intelligence, with the closer adaptation of it to American conditions and needs, should mark a distinct step in advance in our educational procedure. It means the perfection of another and a very important measuring stick for evaluating educational practices, and in particular for diagnosing individual possibilities and needs. Just now the method is new, and its use somewhat limited, but it is the confident prediction of many students of the subject that, before long, intelligence tests will become as much a matter of necessary routine in schoolroom procedure as a blood-count now is in physical diagnosis. That our schoolroom methods will in turn become much more intelligent, and that all classes of children, but especially the gifted and the slow, will profit by such intellectual diagnosis, there can be but little question.

That any parent or teacher, without training, can give these tests, the author in no way contends. However, the observations of Dr. Kohs, cited in , as well as the experience of the author and others who have given courses in intelligence testing to teachers, alike indicate that sufficient skill to enable teachers and school principals to give such tests intelligently is not especially difficult to acquire. This being the case it may be hoped that the requisite training to enable them to handle these tests may be included, very soon, as a part of the necessary pedagogical equipment of those who aspire to administrative positions in our public and private schools.

Besides being of special importance to school officers and to students of education in colleges and normal schools, this volume can confidently be recommended to physicians and social workers, and to teachers and parents interested in intelligence measurements, as at once the simplest and the best explanation of the newly-evolved intelligence tests, which has so far appeared in print.

The constant and growing use of the Binet-Simon intelligence scale in public schools, institutions for defectives, reform schools, juvenile courts, and police courts is sufficient evidence of the intrinsic worth of the method....