The Life of George Washington, Vol. 4 Commander in Chief of the American Forces During the War which Established the Independence of his Country and First President of the United States 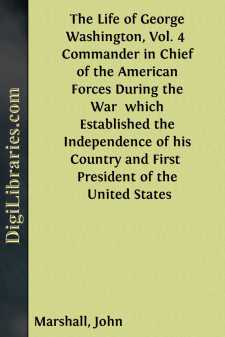 Add to My Favorites
Published: 9 years ago
Downloads: 112
Rating: (0 Votes)

Greene invests Camden.... Battle of Hobkirk's Hill.... Progress of Marion and Lee.... Lord Rawdon retires into the lower country.... Greene invests Ninety Six.... Is repulsed.... Retires from that place.... Active movements of the two armies.... After a short repose they resume active operations.... Battle of Eutaw.... The British army retires towards Charleston.

In South Carolina and Georgia, the campaign of 1781 was uncommonly active. The importance of the object, the perseverance with which it was pursued, the talents of the generals, the courage, activity, and sufferings of the armies, and the accumulated miseries of the inhabitants, gave to the contest for these states, a degree of interest seldom bestowed on military transactions, in which greater numbers have not been employed.

When Lord Cornwallis entered North Carolina, the military operations in the more southern states were committed to Lord Rawdon. For the preservation of his power, a line of posts slightly fortified had been continued from Charleston, by the way of Camden and Ninety Six, to Augusta, in Georgia. The spirit of resistance was still kept up in the north-western and north-eastern parts of the state, by Generals Sumpter and Marion, who respectively commanded a corps of militia. Their exertions, though great, seem not to have been successful; and they excited no alarm, because no addition to their strength was apprehended.

Such was the situation of the country when General Greene formed the bold resolution of endeavouring to reannex it to the American union. His army consisted of about eighteen hundred men. The prospect of procuring subsistence was unpromising, and the chance of reinforcements precarious. He was apprized of the dangers to be encountered, but believed it to be for the public interest to meet them. "I shall take every measure," said this gallant officer, in a letter communicating his plan of operations to General Washington, "to avoid a misfortune. But necessity obliges me to commit myself to chance, and if any accident should attend me, I trust my friends will do justice to my reputation."

The extensive line of posts maintained by Lord Rawdon, presented to Greene many objects, at which, it was probable he might strike with advantage. The day preceding his march from the camp on Deep river, he detached Lee to join General Marion, and communicated his intention of entering South Carolina to General Pickens with a request that he would assemble the western militia, and lay siege to Ninety Six, and Augusta.

Having made these arrangements, he moved from Deep river on the seventh of April, and encamped before Camden on the nineteenth of the same month, within half a mile of the British works. Lord Rawdon had received early notice of his approach, and was prepared for his reception.

Camden stands on a gentle elevation, and is covered on the south and south-west by the Wateree, and on the east by Pine-tree creek. A strong chain of redoubts, extending from the river to the creek, protected the north and west sides of the town. Being unable to storm the works or to invest them on all sides, Greene contented himself with lying before the place in the hope of being reinforced by militia, or of some event which might bring on an action in the open field. With this view he retired a small distance, and encamped on Hobkirk's hill, about a mile and a half from the town. While in this situation, he received information that Colonel Watson was marching up the Santee with about four hundred men. A junction between these two divisions of the British army, could be prevented only by intercepting Watson while at a distance from Camden. For this purpose, he crossed Sand-hill creek and encamped east of Camden, on the road leading to Charleston. It being impracticable to transport the artillery and baggage over the deep marshes adjoining the creek, Colonel Carrington with the North Carolina militia was directed to convey them to a place of safety, and to guard them till farther orders. The army continued a few days in its new encampment, during which the troops subsisted on the scanty supplies furnished by the neighbourhood. Greene was compelled at length, by the want of provisions, to relinquish this position. About the same time he received intelligence which induced him to doubt the approach of Watson. On which he ordered Lieutenant Colonel Carrington to rejoin him; and on the 24th, returned to the north side of the town, and again encamped on Hobkirk's hill, a ridge covered with uninterrupted wood through which the great Waxhaw road passes. The army was encamped in order of battle, its left covered by the swamp of Pine-tree creek.

A drummer, who deserted on the morning after Greene's return, and before he was rejoined by Lieutenant Colonel Carrington, gave information to Lord Rawdon that the artillery and militia had been detached. His lordship determined to seize this favourable occasion for fighting his enemy to advantage, and, at the head of nine hundred men, marched out of town on the morning of the twenty-fifth to attack the American army.

Lieutenant Colonel Carrington had arrived in camp that morning, and brought with him a supply of provisions which had been issued to the troops, some of whom were employed in cooking and others in washing their clothes. Notwithstanding those occupations, they were in reach of their arms, and were in readiness to take their ground and engage at a moment's warning.

By keeping close to the swamp, and making a circuit of some distance, Lord Rawdon gained the American left without being perceived; and about eleven, his approach was announced by the fire of the advanced piquets, who were half a mile in front of Greene's encampment. Orders were instantly given to form the American line of battle.

The Virginia brigade commanded by General Huger, consisting of two regiments under Campbell and Hawes, was drawn up on the right of the great road....