The Foolish Dictionary An exhausting work of reference to un-certain English words, their origin, meaning, legitimate and illegitimate use, confused by a few pictures [not included] 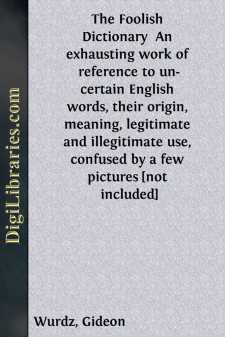 It's a long lane that has no ashbarrel.   Distilled waters run deep.

ABSINTHE From two Latin words, ad, and sinistrum, meaning "to the bad." If in doubt, try one. (Old adage, "Absinthe makes the jag last longer)."

From the Persian ab, water, and stein, or tankard. Hence, water-tankard, or "water wagon."

ACCESSION A beheading process by which you may either win or lose a political job. Old spelling, Axe-session.

ACCIDENT A condition of affairs in which presence of mind is good, but absence of body better.

ADAMANT From "Adam's Aunt," reputed to be a hard character. Hence, anything tough, or hard.

ADVICE A commodity peddled by your lawyer and given away by your mother-in-law, but impossible to dispose of yourself. Famous as the one thing which it is "More blessed to give than receive." GOOD ADVICE Something old men give young men when they can no longer give them a bad example.

AFFINITY Complimentary term for your husband or your wife. Sometimes a synonym for "Your finish."

AFTERTHOUGHT A tardy sense of prudence that prompts one to try to shut his mouth about the time he has put his foot in it.

AGE Something to brag about in your wine-cellar and forget in a birth-day book The boast of an old vintage, the bug a boo of an old maid.

ALCOHOL A liquid good for preserving almost everything except secrets.

A political office known as the Crook's Road to Wealth. From Eng. all, and Greek derma, meaning skin—"all skin."

ALLOPATHY From Eng. all, everybody, and Grk. pathos, pain. Pain for everybody. HOMŒOPATHY From Grk. homoios, same, and pathos. Pain, just the same.

ALPHABET A toy for the children found in books, blocks, pictures and vermicelli soup. Contains 26 letters and only three syllables.

ANCESTORS The originators of the Family Tree, a remarkable sex paradox in which the Ann sisters are always the four fathers.

ANTIMONY A metallic substance discovered by Valentine in 1450, and now extensively used in the arts—particularly poker.

APPENDICITIS A modern pain, costing about $200 more than the old-fashioned stomach-ache.

ARGUMENT Breaking and entering the ear, assault and battery on the brain and disturbing the peace.

ARTIST Commonly, the individual long haired and short-suited, having a positive pose and an uncertain income. Often shy on meal-tickets but strong on technique and the price of tripe sandwiches. An artist may be a barber, a boot-black, a Sargent or a Paderewski.